It's done nothing but rain all day so the opportunity to 'play' outside didn't really show itself. Therefore it was time to hide inside and play in the kitchen instead. To be honest it's something I haven't really had the opportunity to do for some time now so the rain did a good job of pointing that out to me.

I was feeling a slight tinge of Autumn and so decided to make one of my favourite hearty dishes; seitan with mushroom and red wine sauce.  I also had the desire for potatoes but, feeling experimental, chose a recipe I found in The China Study Cookbook rather than just cook up bog standard boiled, baked or roasted spuds.  All the recipes in this vegan delight are super healthy and don't use oil so vegan broth is used to cook many of the savoury dishes.  That might not sound very inspiring and just a bit too saintly but actually I am always surprised at the tastiness of the results.

The recipe I chose was Tasty Potatoes and Kale on page 237 and it was indeed very tasty. I used some of the black kale from our garden (although got more than a little rained on in the process of harvesting it).  The only thing I deviated with was to put the finished dish in the oven for a few minutes just because the other dishes weren't quite ready yet.  I think that added a bit more crispiness and intensified the flavour a little so I didn't regret that move at all!   Go get the book if you want to try some tasty but sinless vegan recipes but if you want to 'try before you buy' I did notice that the ladies at Nuts About Greens have published this particular recipe on their blog (among lots of other lovely recipes). 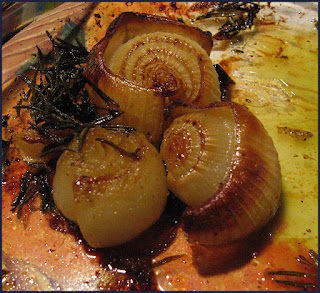 So finally on to the subject of this particular post; the humble onion.  It occurred to me that many things we cook start off with an onion; sometimes even when I start cooking but still don't know what I am actually going to cook!  So I thought for a change I would make the onion the star of a dish in its own right.

Roasting really intensifies flavours so I popped a few small sized whole peeled onions into a roasting dish, added some fresh rosemary from the garden (that was another dash out into the rain), a generous grinding of black pepper along with a glug of nice olive oil and a dash of balsamic vinegar.  I then snuck in a few cloves of peeled garlic whilst Phil wasn't watching and popped it all in the oven for a good 45 minutes at 200 degrees C.

The resulting onions were sweet and rich and definitely able to hold their own against the other two dishes.  It really make me think that sometimes we 'hide' ingredients and over complicate dishes when making one ingredient the star of a dish can often yield not only tasty but also very easy little alternatives.  I really should try out this theory more often.
Posted by Scooby Gill at 9:50 pm