Exciting news has reached us today of a vegan takeaway delivery service and, best of all, it is in our neck of the woods.

Vegan Takeaway Delicatessen is a 100% vegan takeaway delivery service for the Perranporth, Newquay and Truro areas of Cornwall.  The service will run for six evenings a week (not available Mondays) from Saturday 4th November.

This family run business, led by Lisa and Matt, who have been vegan for 6 months, aims to deliver real home cooked takeaway style comfort food direct to your door; an absolute first in this area from a 100% vegan company.  We could be wrong but we are unaware of any company that are currently providing this service so credit to them for coming up with this obvious but overlooked business opportunity. For those winter nights ahead when work has knocked the stuffing out of any idea of cooking something tasty from scratch, this is a delicious and naughty prospect for us!

If this idea wasn't tempting enough, a look at their website will just tip you over the temptation edge.  Barbeque Seitan Ribs, Barbequed 'Pulled Pork' Jack Fruit Sliders, Panko Coated Better Than Chicken Wraps, Seitan Doner Kebabs and Southern Fried Spicy Better Than Chicken Burgers feature as the mains currently on offer, whilst the sides include, amongst Curly Fries and Potato Wedges, the very alluring Mozzarella Sticks.  There are even Chocolate Chip and Pecan Brownies available to top it all off for dessert.

To help their new business get off to a flying start they are offering 10% off your first order of £15 or more for any day if you pre-order on their website before 31st October.  Just take a look at their website and use the code - Pre-Order10%off!

Check out the full range, delivery details and prices at Vegan Takeaway Delicatessen.  They also have a Facebook page if you wish to keep up with the latest news from this deliciously new vegan company.  We wish them all the best in this new venture. 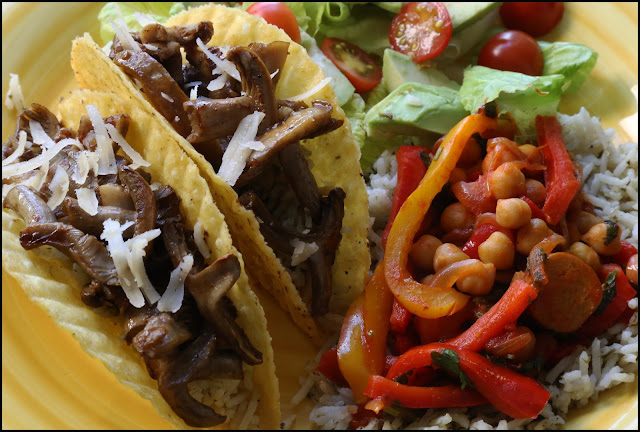 We've been talking a lot recently about wild mushrooms (did you notice?) and also our last post touched on our love of Mexican food.  Recently we combined both by making some tacos with wild mushrooms as the main theme.  Ideally we would have used our own homemade tortillas to make this recipe but we had a part-used pack of shop bought taco shells to use up so employed these.

Having multinational culinary tendencies, our plates on this occasion crossed borders and continents; and why not?  So along with the Mexican tacos, Phil travelled all the way to Spain and cooked up an Iberian influenced stew before dropping down to the Middle East and creating a Yeminite rice dish with the help of Zhoug spice paste.

Our friend Dominic, Master of Spicing, Pickles, and Chutneys (among his various other artful skills) had put us onto Zhoug paste a few years ago.  The ingredients can vary, from simple to complex, and can include blends of fresh coriander, parsley, and cloves, with a delicate background of basil, cardamon, cumin, chilli, and Phil's nemesis; garlic.  We never did get around to making it ourselves before we discovered it for sale ready made by Belazu.  Phil has since explored its use in many ways but the simplicity of this rice dish really lets the flavour sing all on its own.

Talking of simplicity, and returning to the centre stage, the tacos here were made predomantly with Yellow Russula mushrooms (among a few others - see the photo left and bottom) we found out whilst foraging but they could be made equally as well with any mushrooms you buy in the shops.

Phil made all these dishes separately but when it comes to serving a taco plate, they could be piled on in any combination, along with lettuce, tomatoes and avocado to your liking. Tacos don't have rules or borders and neither should any plate of food! 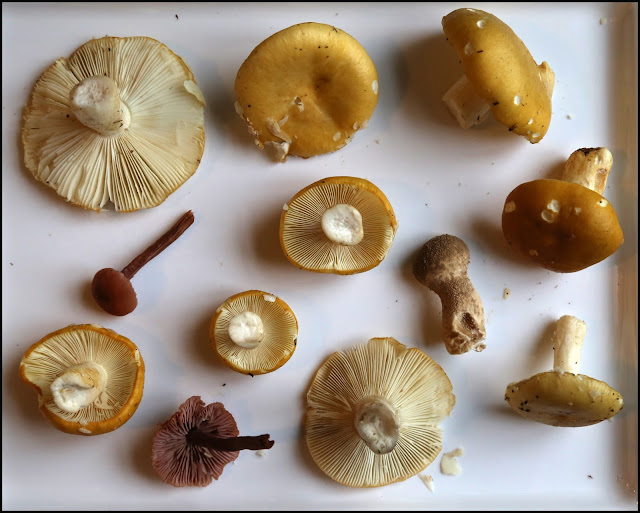 Slice up the mushrooms quite chunkily and chuck into a baking dish.  Splash on the Worcestershire Sauce, and both hot sauces, along with the sprinkle of salt and a little splash of oil.  Do all this to taste and to coat the mushrooms.  You'll know how much!  Roast in the oven on about 200 degrees C for 30 minutes until nice and golden. Towards the end of the cooking time, put your tacos in the oven to heat up.  Load your mushrooms into your warm tacos either on their own or with whatever feels good.

Add lettuce, tomatoes, and avocado to the plate - that is always good!

Heat the oil in a pan and add the onion to saute until soft.  Add the 2 types of paprika, and stir in for 30 seconds, then add in the peppers and continue to cook for a further 5 mins.  Add the tomato puree and mix well, then all the other ingredients except the coriander.  Cook for a further 5 mins, and then add the coriander just before serving.

Mix all of the above into a saucepan, bring back to the boil, and then turn down to a slow simmer and cook for 10 minutes.  Then leave to rest for 10 mins.

Enjoy!
Posted by Scooby Gill at 7:56 pm No comments: 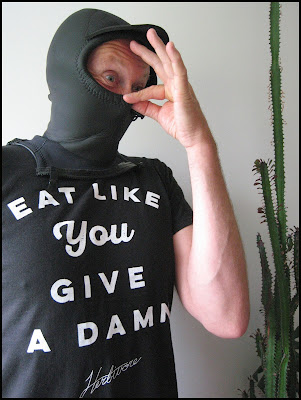 I love garlic.  Phil doesn't; well not to the extent that I do anyhow.  With the rain and wind lashing against the window proper Cornish style, I planned a day in the kitchen making some 'staples'.

I was thinking that Phil may have gone off surfing for a while so was going to sneak in making something extremely garlicky.  However, with howling onshore winds, that wasn't going to happen.  I resolved to suffer the sarcastic garlic hating remarks regardless and make it anyway.  He amused me by donning his makeshift PPE (aka his wetsuit hood).  Funny boy.

He got his revenge though when he started to dry fry some chillies in preparation for the other staple we had planned; Mexican chorizo seitan.  I spluttered that he was the one in need of a risk assessment if anyone was, as I gently opened the door for a quick blast of chilli fume clearing wind. 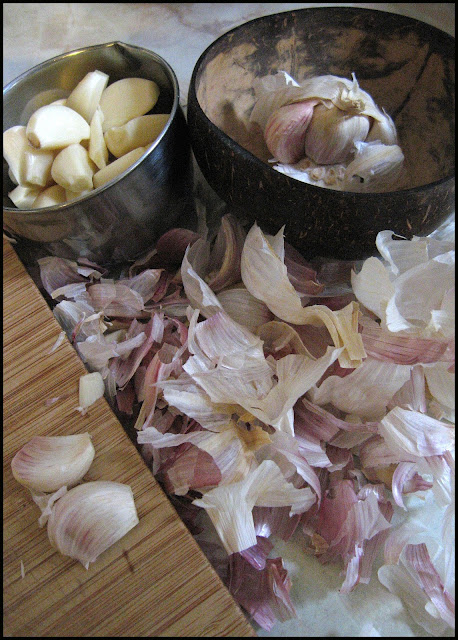 With the chilli fumes all but cleared I continued peeling the countless garlic cloves that I needed for my chosen recipe.  I was making Mojo de Ajo (garlic sauce); a roasted garlic citrus-infused oil, which is one of the essential ingredients of the Mexican kitchen. This is one staple that would keep us taco'ed up for some months so it is worth a rainy day cooking session.

Both the garlic sauce and the chorizo seitan are from Vegan Tacos by Jason Wyrick, which we bought and have enjoyed exploring recently.  We even treated ourselves to a tortilla press as a result (but more about that in a future blog post).

The Flattened Seitan recipe from the book is a longish process to make, but so worth the effort and makes a great amount to last for many meals, as I'm sure will the chorizo seitan we made today.  If you love your Mexican food we highly recommend this book and we still have so much of it to explore!

The funny thing was once I had made the Mojo de Ajo, Phil remarked that it actually smelt lovely.  At that moment the sun came out for the first time today!

Read more about Jason Wyrick on The Vegan Taste or connect on his Facebook page.

We would love to share the aforementioned recipes with you, but they are not ours to share.  You need to get your own copy of this wonderful book!

Enjoy!
Posted by Scooby Gill at 4:31 pm No comments: