Spare A Thought (And A Spud) For Gnocchi 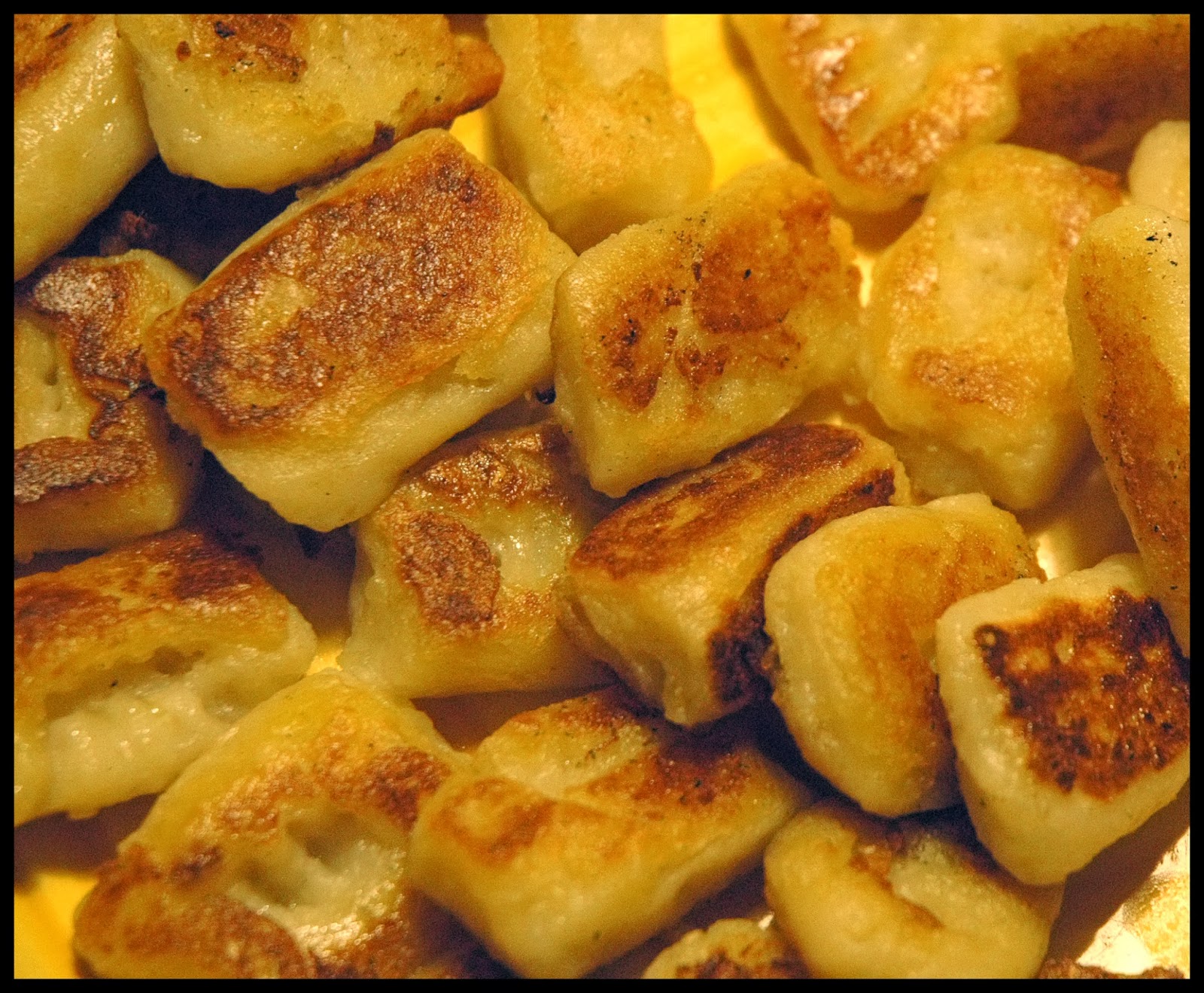 I have a recollection of comedienne Sue Perkins once making a joke about her family when she was growing up, and how they always used yesterdays leftovers for that evening's meal. Their meals therefore effectively dated back to the original meal in the early 1970's!

Whilst we cannot claim to be that extreme we do on occasions have leftovers that, if not suitable for lunch the next day, will no doubt end up in the evening meal.  Food never, never goes to waste in our house!

One of the common leftovers is potatoes and particularly baked potatoes.  Whilst the oven is on and you are feeling hungry in anticipation of soft, hot fluffy baked spuds there is always the temptation of overkill when it comes to preparing the required number.  Undoubtedly we end up with too many and I hear the imaginary voice of my mum whispering 'eyes bigger than bellies' in my ear as I stare at the resulting spares.  It is the next evening however that these leftovers show their true tasty potential when Phil transforms cold baked spud into potato gnocchi.

Gnocchi is actually a word for various forms of thick dumpling like pasta which, according to the region of Italy, are made from various forms of flour and other ingredients.  The potato gnocchi was only introduced when the potato was brought to Europe back in the 16th century.  This now traditional dish can be kept true to its simple peasant beginnings or transformed into the dizzy heights of dishes featured on Michelin starred menus.  Either way, it is comfort food at its best.

As the only stars we will ever see are those twinkling away in the night sky over the Cornish coast, we tend to keep things simple and true to our peasant ways!  So here is how Phil makes his gnocchi.

1.  Simply scrape out the inside of the leftover spuds into a nice big bowl.  The skin can then be consumed as a starter/entree/canape (delete as appropriate) whilst you rummage for some plain flour in the cupboard.

2.  To the potato add a pinch of salt to taste, and just enough flour to bring the mixture to a kneadable dough.

3.  Roll out the dough into a thin 'sausage' and then cut into about 1 inch pieces. Indent each piece with the tines of a fork (this helps them cook).

4.  Bring a pan of water to a boil and then drop the pieces in.  Don't overcrowd them at this stage or they will stick to each other.  When they are ready they will float to the top.  This should only take 2 or 3 minutes.  Remove them with a slotted spoon and put aside whilst you boil the rest.

5.  Then simply fry until browned and crispy on the outside and enjoy with or without a sauce (we made a simple leek and cheese sauce but a tomato one would be equally nice).

Posted by Scooby Gill at 7:03 pm No comments:

I do enjoy a good rummage around a charity shop (it's where most of my fashion sense comes from!) and Oxfam are one of my favourites as they have the added bonus of having fairly traded edibles and consumables too.

It was during one such rummage that I discovered a new vegan lip balm (well new to me anyway). What caught my attention was the fact that it was clearly labelled as vegan on the front of the packet without even the need to scan the normally excruciatingly small ingredients list. What a delight!

The lip balms, by German company 'Fair Squared', come in four different 'flavours' and use almond oil and apricot kernel oil from Pakistan, coconut oil from India and cocoa butter from Peru; all certified Fairly Traded. I chose Vanilla but there is also the choice of Pomegranate, Spearmint or Citrus and at a reasonable £2.99 a pop, it seems more than fair to me to give my winterised parched lips a fairly traded vegan treat.    They are available from Oxfam stores nationwide as individual flavours or in a 4 pack from Amnesty International, Friends of the Earth and New Internationalist in the UK.

At the moment  the Fair Squared website seems a little scant on details and I am unsure as to whether any of the other products are vegan or not.  However, in a world where most readily available lip balms seem to have non vegan ingredients such as beeswax in them, I am just delighted that this one is now on the high street and very proudly identifies its vegan status.

About Fair Squared
Posted by Scooby Gill at 6:30 pm No comments:

We Animals and The Ghosts In Our Machine

As a photographer and long term vegan, this project and resulting book really interest me, along with the film 'The Ghosts In Our Machine' that Jo-Anne McArthur was the subject of.  I will be investigating the book, which was released in December 2013 (buy it direct from We Animals here) and also looking out for the film.

Here are the details about Jo-Anne McArthur and the project taken from the We Animals website.

The We Animals project was created by award-winning photojournalist Jo-Anne McArthur who has been documenting the plight of animals on all seven continents for over ten years.  Her documentary project, We Animals, is internationally celebrated and over one hundred animal organizations, among them Igualdad Animal, Sea Shepherd and the Jane Goodall Institute, have benefited from her photography.

Jo-Anne is the subject of Canadian film maker Liz Marshall's celebrated documentary 'The Ghosts In Our Machine'.

Posted by Scooby Gill at 7:00 pm No comments:

How Lucky Are We?

I never, never forget how lucky we are.  It may be raining and chilly here in winterised Cornwall but life is still good.

What inspired this moment you may ask?  Well, for a start I went out into the front garden to feed the badger.  That in itself is a wonderful moment to think that we have Britain's biggest remaining wild mammal visiting our garden on a regular basis.  It makes me feel privileged in a way that money would never do.

What made it extra special is hearing the sound of the waves on the beach from our front garden.  That is the icing on the 'living in Cornwall' cake.  Nothing makes me feel at home more than hearing those waves.  They were rolling in long before I arrived and will be long after I'm gone.  Their reliable predictability make me feel comfortable and at home.

These are the reasons I love living where I do.
Posted by Scooby Gill at 7:53 pm No comments:

So we might be a bit behind the times but we have only just seen the full length documentary 'Vegucated'.  I must say I thought it was very good and sets out all the right reasons to look at moving to a vegan diet in an unpatronising way.

I think the overriding message for me, and indeed the participants, was that it is all so obvious but so many people just simply fail to even think about how their food reaches their plate and what the consequences are.  That is the real mystery to me.

A huge 'big up' goes to all the participants  who took part in this film experiment but particularly to Brian Flegel.  Out of all of them he seemed to embrace veganism the most.  For him it was a life changer and he certainly looks good on it.  May his experience go to influence many more.

Posted by Scooby Gill at 2:23 pm No comments:

Vegan Pie in the Sky 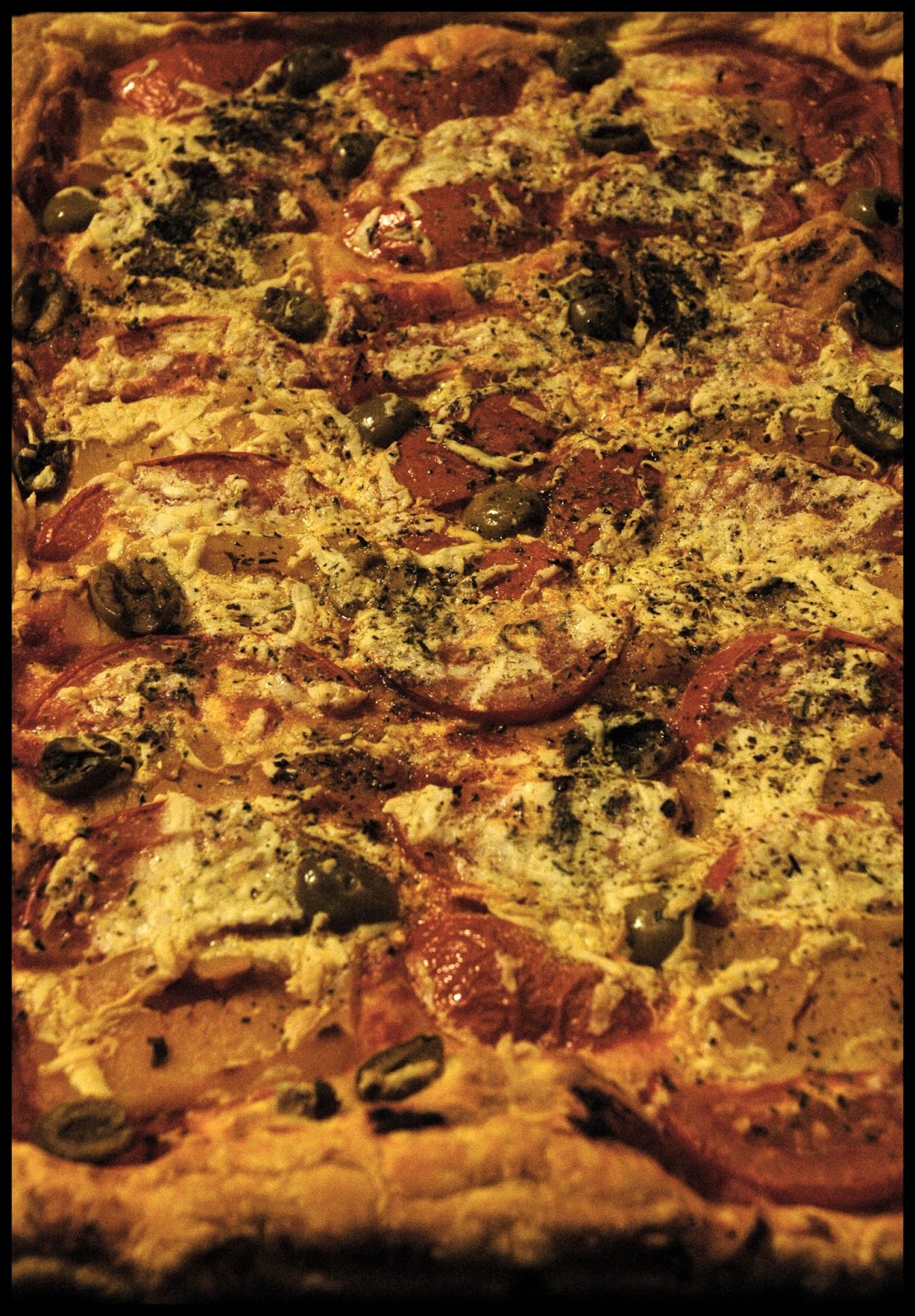 The good old post festive season, along with the remnants of a horrible chesty cough, has left me kind of lazy with cooking from scratch and spending experimental hours in the kitchen so with some unused ready made puff pastry calling to be used in the fridge, I reached for an old quick comfort food favourite - the quick flan.

Simply take a packet of ready rolled Jus Rol Puff Pastry and well, unroll onto a greased baking tray.  Top with your current and favourite topping as dictated by the contents of your fridge and bake for about 25 minutes at about 200 degrees C.  In this case I took the two cheese approach as we had some Vegusto Aromatic left so that went on the bottom, topped off with some sliced tomatoes and some halved pitted olives and then finished off with some grated Tofutti Mozzarella Styley Cheese and some dried mixed herbs.  It took a mere 5 minutes or less to compile which suited me down to the ground and it tasted great.......simple, effective and super quick.

As great as this simple creation was however, I am really looking forward to experimenting with more adventurous creations from one of the books I got for Christmas from Phil; 'Pies and Tarts with Heart'.  This 'new kid on the vegan cooking book' block has 60 plus sweet and savoury vegan pies to ooh and aah at. I'm excited enough about trying some of the pie bases, including mashed potato crust and hash brown pie crust, let alone the creative fillings that make up this book.  The polenta mushroom pie may be at the top of the list or the maple laced caramel walnut pie or.....well there are so many to choose from, including a whole raw section.

The only thing I am not sure about is the recipe for Cornish pasties....it has herbs de provence in it.  Sorry but that is far too sophisticated for a Cornish working man's pie!  That's just wrong.

Posted by Scooby Gill at 7:11 pm No comments:

Rush Hour on the Beach 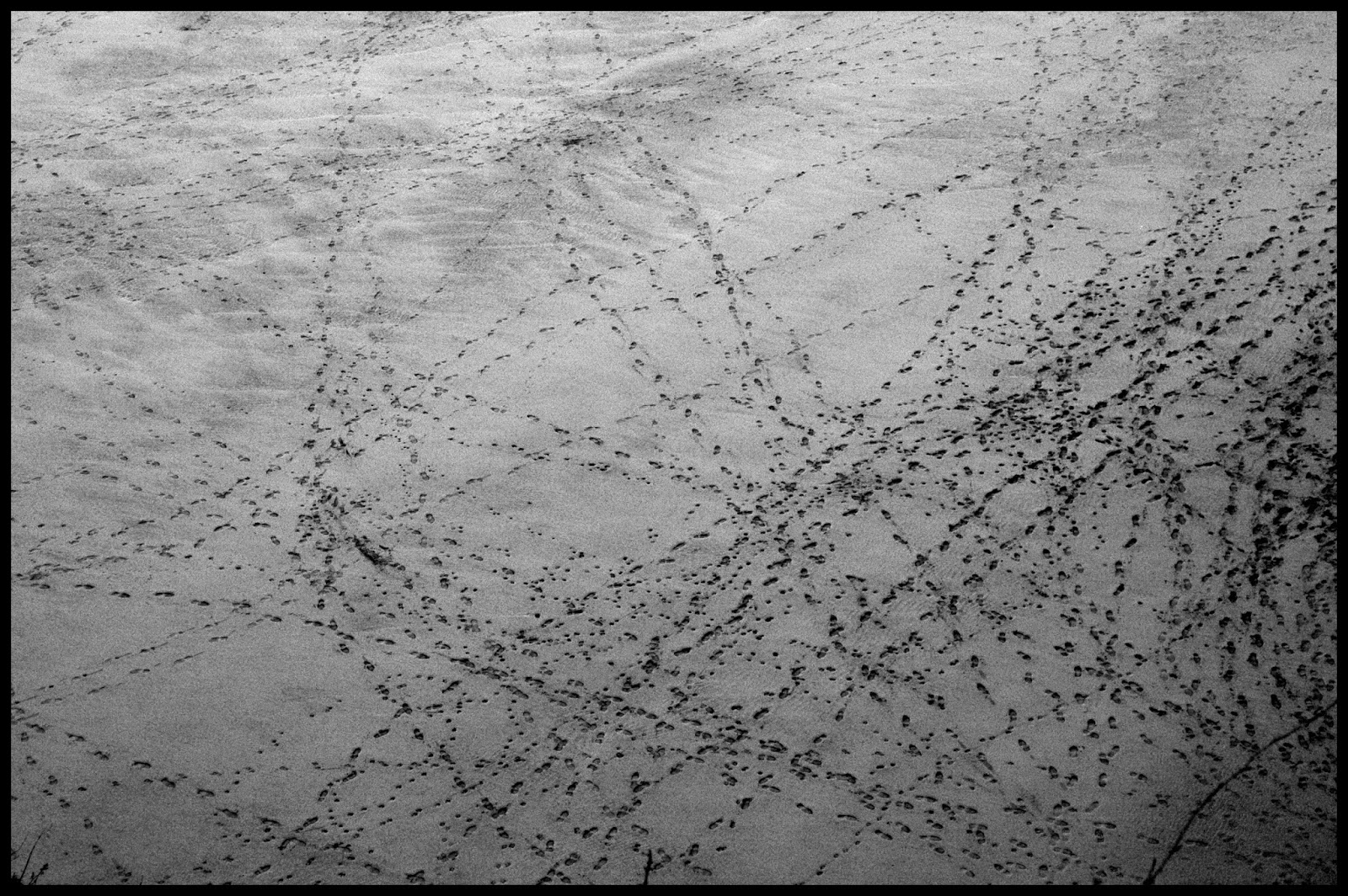 The joy of the wide open space of the beach is that everyone can walk where and how they like and the resulting patterns are random and beautiful.  There is no pavement or footpath here to guide you and control you on your journey.  You merely make your own path to the things that interest you the most and sometimes those things are popular, and you cross paths with many others,  and sometimes you stride off on your own onto virgin sand to discover something that is important and beautiful to only you.  Open space allows you to choose your own way more, much in the same way an open mind does.
Posted by Scooby Gill at 6:27 pm No comments:

All Too Much (Even for the Badger)!

The festive season is finally behind us.  Although it is lovely to see family (especially those from far away), it is also kind of nice to return to some kind of normality.

We had a house full over Christmas and New Year, hence the lack of any recent blog posts.   It was all a squeeze on space and time and certainly a time of excess, where in my panic to make sure everyone had enough to eat and enjoy, I usually made too much food.

I am proud to say that despite that, nothing went to waste.  The odd bit here and there that was surplus to requirements merely made it out to the front garden where the badger was one of the first to take advantage.  This particular evening I was relying on the rain to break down this rather hard half a loaf of bread but the badger didn't want to wait that long.  It was all his for the taking and, as undignified as it looked, he was going to take it all.

Posted by Scooby Gill at 7:51 pm No comments: