Nowzad Dogs - One Dog at a Time

When we were at the Animal Aid Cruelty Free Fair in Exeter in November I bought a book from a stall for Nowzad Dogs, a charity that rescues stray and abandoned animals in Afghanistan.  I thought it looked like an interesting book for my brother in law, an ex US marine who served in Afghanistan who is also very fond of his extended family of dogs.  Between him and my sister they have four dogs at their home in Alaska, one of which was a stray that my sister rescued whilst on a business trip to South Korea.

Naturally I wanted to read the book first to make sure it was a good recommendation!  I wasn't disappointed.  It was a gripping read and one that will remain in my mind for some time yet on many different levels.  It is far from an easy read with your heart being wrenched in empathy for Pen Farthing's desperate attempts to make a difference, both with canine and human souls caught up in the conflict.  Your feelings regarding conflict aside, it is a real insight into the everyday world of soldiers slap bang in the middle of it all and the different ways that they find to deal with the stress.  The lengths Pen, his colleagues, family and friends went to in order to rescue the original strays that adopted him as their guardian is determination personified.  It laid the groundwork for any soldier stationed over there to not have to go through the same torment in trying to find a better life for stray animals that have adopted them as well as making huge steps in improving the general welfare of animals over there.

Nowzad Dogs also quite rightly go to great lengths to stress that there are plenty of four legged friends requiring loving homes over here too.  On the eve of Christmas Day this is a particularly apt moment for such thoughts given the amount of animals abandoned at this time of year.  However, there is no doubt that the work that Nowzad Dogs does in Afghanistan reaches another level of compassion by at least providing the one and only reliable rescue in the country.

I will be passing on 'One Dog at a Time' to my brother in law but in the meantime I will be ordering  the sequel for myself.  I truly want to follow the continuing story and work of the resulting official charity.  I implore you to look them up, read the story for yourself and be inspired and heartened by the compassion and dedication show by Pen and his crew.

Quorn is NOT Vegan!

Quorn came on to the market long after I went vegan.  It's not vegan due to its prolific use of eggs and sometimes milk.  I have therefore never eaten Quorn; that is until some idiot in a restaurant decided that he would serve me some.
I was on a night out with my colleagues from work and we have gone to the same Caribbean restaurant that we had the year before where the food had been very good.  As usual a request had been made in advance for all my food to be vegan.  I made the mistake of trusting a reputable restaurant to know the food products they are serving and in fact did not expect to be served with something premade anyway as part of a restaurant cooked meal.
The main course arrived with a lump of something on top that I actually presumed to be plantain, which I love.  However after slicing off a small section and tasting it I was confused.  I had never tasted anything like that before so I asked the waitress who very casually told me it was Quorn.  The damage had been done by then as I really didn't have trust in any of the food that would be served me that night.  I resorted to alcoholic refreshment (which was the second mistake of the evening as I discovered the following morning!).
It amazes me that a business that is dealing with food was so unaware of a food item and its contents, especially when a special request of a vegan meal had been made.  Ironically the owner also seems to come from a culture not too far away from Rastafari roots.  The Rasta way of living (livity) is generally referred to as Ital, a pure approach to life and energy and Ital normally follows a vegan diet....but perhaps that's me making unfair assumptions on the culture front (not the food business front though) as it seems that most people seem to think that Quorn is vegan!
I blame the fact that Quorn has a massive dominance over the vegetarian market, not really even giving an inch to other potentially vegan products on the supermarket shelves.  A sea of orange confronts you as you try and dig around for an alternative on those nights that you really cannot be bothered to 'make from scratch'.  It really annoys me and even more so now that I have been unwittingly fed the stuff!
So the moral of the story is...........scorn the Quorn and never trust a restaurant to exactly know what it is serving you.
Posted by Scooby Gill at 7:42 pm No comments:

All It Takes is a Celebrity!

If Jay-Z and his wife, Beyoncé are now vegan then surely that makes us vegans all totally cool!?  Right?  Well that surely means that Phil and I were the original Jay-Z and Beyoncé many years ago....er maybe not (although my bottom does seem to be expanding just a touch in the latter years!). Good luck to them and I really hope that they totally benefit from their sensible decision with the added bonus of spreading the vegan message to all those who strive to live their lives via those of the celebrity.
Veganism does seem to be more and more in the news these days though which is totally amazing given the 'hippy weirdo' image that both Phil and I were labelled with 25 years ago.  It has become more acceptable.  I normally don't enjoy being acceptable, as it is far more fun not to be, but because veganism is a great idea, I'll go along with that!
Here is the latest offering in the mainstream media from the Independent which was also reviewed on BBC Radio 4 this morning.
Veganism 2.0: Let them eat kale
Interesting the original article goofed up and said that Quorn was vegan but after many comments pointing this out, this has since been corrected!

Posted by Scooby Gill at 7:18 pm No comments: 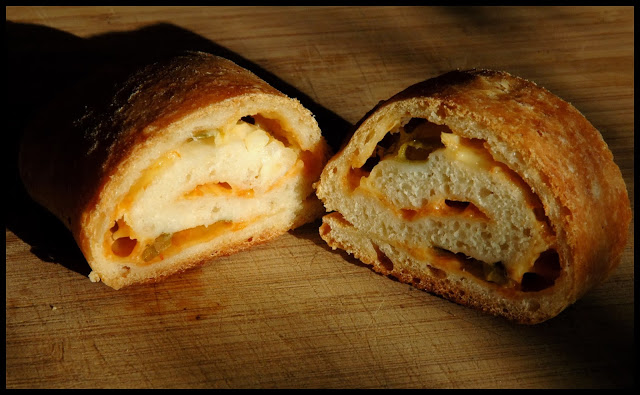 We made pizza last night using our steadfast dough recipe (although we didn't have any spelt flour so had to use all white).  Having some dough left over we fancied a little experiment.  So we rolled out the dough, spread some of Scooby's Scotch Sauce all over it, added some grated vegan cheese and a sprinkle of finely chopped spring onions (from our own garden) and then roll 'em, roll 'em, roll 'em'd the dough up.  We then baked the resulting sausage shapes at 200 degrees C for about 25 minutes until golden brown on top.
Hmmmmmm, not bad.
Enjoy!
Posted by Scooby Gill at 6:44 pm No comments:

We recently went to the South West Christmas Without Cruelty Festival and as usual met up with old friends whilst enjoying the wonder of being surrounded by like minded people.  If you didn't go....well you missed out!
A couple of friends, we were delighted to hear, have been very busy with new businesses over the border in Devon and we were even more pleased to hear that both businesses are trading in ethical, vegan products.
We wish them all the success in their new ventures and will certainly make the effort to visit them when next in the area.  In the meantime, we thought we'd help spread the word so if you are in Plymouth or Newton Abbot please do visit and support Fairport and Mim's Emporium in the knowledge that they are both businesses with their vegan hearts and minds in the right place.
Fairport
Stalls 99 and 100
Plymouth City Market
Plymouth
Devon
PL1 1PS
Open Monday to Saturday 9.30am - 4.30pm (3.30pm Wednesdays)
http://www.fairport.coop/
Mim's Emporium
Stall 5
Market Food Hall
Market Street
Newton Abbot
Devon
TQ12 2RJ
http://www.mimsemporium.co.uk/
Posted by Scooby Gill at 6:13 pm No comments: