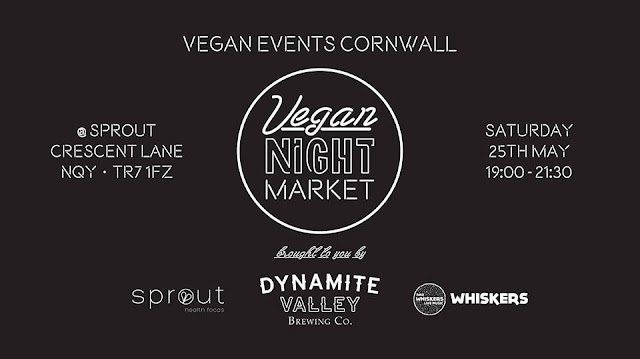 If you are heading to the North Shore of Kernowfornia this bank holiday weekend and are looking for a vegan evening adventure then the Vegan Night Market in Newquay has been especially put on for you.

Organised by Vegan Events Cornwall, the event is hosted and based at Sprout Health Foods in the heart of Newquay.  It's also supported by Dynamite Valley Brewing Co and Whiskers, the bar and live music venue (voted TripAdvisor's No 1 night out in Cornwall) just a cat's whiskers away from Sprout, and where the party will move on to after the market (with a drinks promo thrown in for good measure).

There will be plenty of food at the market to ensure you are fuelled up and have your dancing shoes on for the after party.  Sprout Health Foods are planning their delicious SproutPots of loveliness whilst Sloth and Sparrow are in town to heat us up with their colourful range of Mexican street food.  For the sweet toothed amongst you Renaissance Cakery  and Lemon Thyme Patisserie will be there with a double dose of vegan naughty treats.  You can wash it all down with some fine craft beers from the very local Atlantic Brewery or sponsors Dynamite Valley Brewing Co.(free tasters apparently when you arrive too!).

Once you have stuffed yourself full of vegan goodies, there is still plenty to take in with Newquay based vegan company Generation V selling their sustainable, organic and hand-drawn street wear, local artist, illustrator and author Maia Walczak promoting her new book Wylder, ReWilding Books providing their amazing stall of books that appeal to the more open minded readers among us, and floating nicely into the scene ARBO Surfboards with their hollow wooden surfboards and schedule of surfboard building workshops.

Phew, all that remains to tell you is to be there!  It's on Saturday (25th May) evening from 7pm - 9.30pm at Sprout Health Foods with the party moving on to Whiskers after.  For more information check out the Facebook Vegan Events Cornwall page.
Posted by Scooby Gill at 7:47 pm No comments: 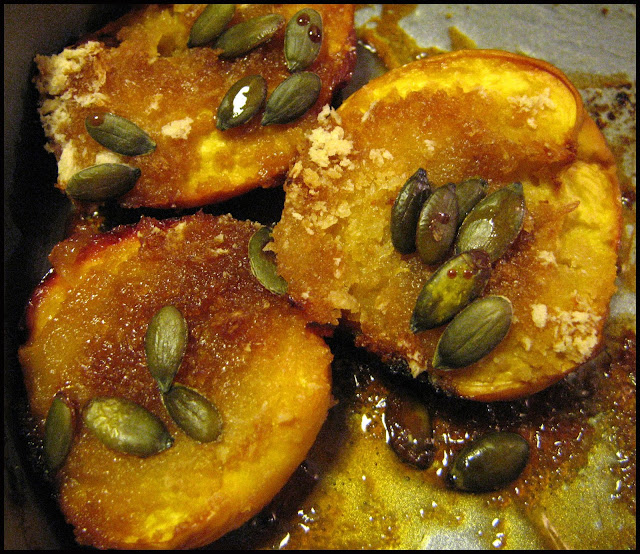 I made a delicious 'make it up as I go along and do it right now' pudding the other day.  I had bought some cheap nectarines at a supermarket, you know the ones that have been priced down because they have gone past their so called 'sell by' date even though they are still too firm to actually eat yet.  Well they suddenly all got ripe at once and after a few morning smoothies there were some left and I then did need to use them up.  I was also in one of those moods when savoury meets sweet and there are certain ingredients that you really fancy.  On this day it was pumpkin seeds and balsamic.

Phil will tell you that despite the mountain of vegan cook books I have, often I will just go into some weird trance and start making something without really thinking too hard about it.  I don't believe it has ever ended in anything inedible, which is lucky, but when I really hit a 'gold star' moment with something I have cooked it is annoying when I can't remember how I actually got to that point.  This recipe could have been one of those moments had it not involved very few ingredients and I had not rushed to scribble down what I remembered of this simple concoction after I had tasted it.  I told Phil it was terrible (sshhhh..) as I wanted it all to myself.  Here's what happened.....

Nectarines (or peaches would be good too, maybe figs, or hang on, apricots too and hmmm, what else.......?)
Bit of vegan margarine
Vegan Honea (love this stuff)
Breadcrumbs
Pumpkin seeds
Balsamic glaze (make sure vegan)
Yoghurt of your choice to serve

1. Slice your nectarines in two, removing the stone.
2. Place in a greased baking dish cut side up.
3. Put a small knob of margarine in the stone indent of each half.
4. Drizzle with Vegan Honea.
5. Scatter over some breadcrumbs and pumpkin seeds.
6. Drizzle over some balsamic glaze.
7. Bake in the oven at about 200 degrees C until soft (reckon it was about 25 minutes)
8. Let cool a little (or totally) and serve with yoghurt and drizzled with more honey.

The Eco Collective Opens The Doors 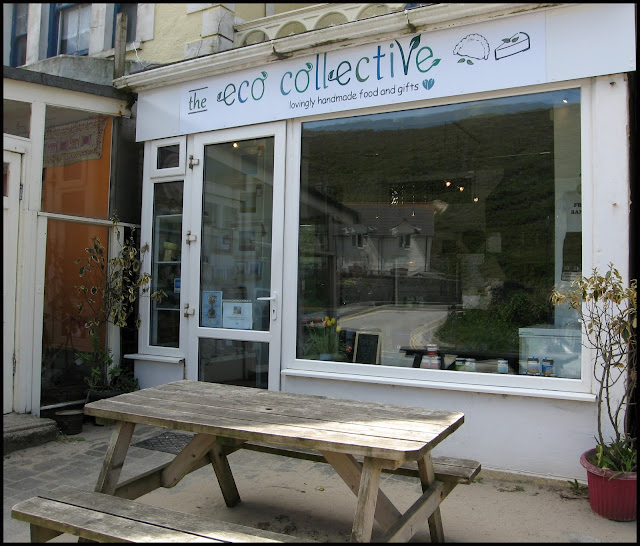 May is my favourite month of the year.  Not only do you get two bank holiday weekends to enjoy but the Cornish countryside really kicks into full green mode in preparation for the summer ahead.  Everybody and everything suddenly springs into increased activity and there seems to be a plethora of interesting vegan events, places to eat and visit and cooking inspiration to explore.  It is difficult trying to fit it all in and particularly so writing about it all!

Kicking May off for us was a visit to the newly opened Eco Collective shop on the north coast.  Just down the road from the already well established eco, music and veggie/vegan food venue of Mount Pleasant Eco Park, the Eco Collective sits nestled in the steep sided coastal village of Porthtowan, making this area now a double destination adventure for any curious and hungry vegan. 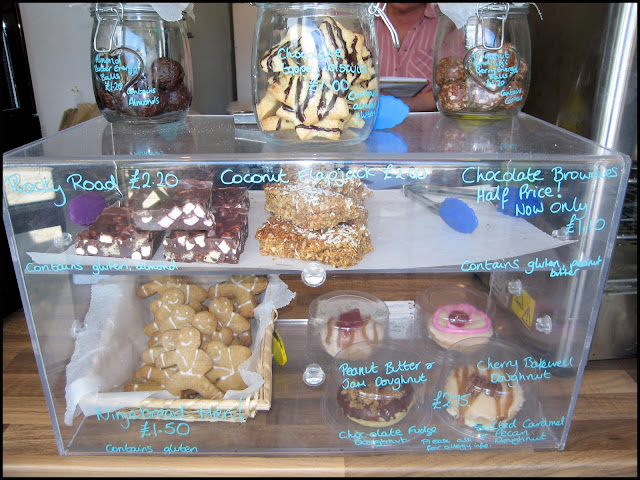 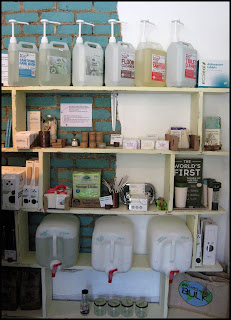 The Eco Collective is easy to find.  Just take the one road into the village and towards the beach and you will see it just behind the post box on the left, and opposite ample parking.

There are handy benches just outside on which to devour the vegan goodies you have just purchased before heading back in for more.  There are plenty of filling, virtuous and naughty options to choose from including pasties from The Cornish Vegan Pasty Company (tasty fillings and no palm oil here), irresistible savoury and sweet treats from Nature’s Treats (again palm oil free and refined sugar free) and for a totally needed naughty blast, grab a Velicious Vegan Doughnut  to devour or a cooling Booja Booja or Coconuts ice cream from the driftwood decorated freezer.

The display cases may be full of ready to eat wonders but there is also a selection of food and household staples, including a refill section for washing up, laundry, cleaning and bathroom supplies. 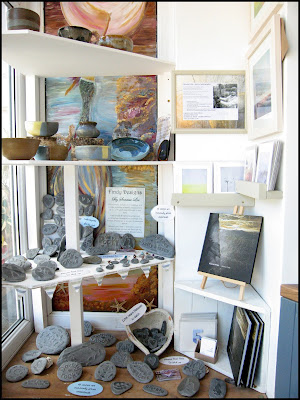 If it’s a special gift for someone eco or vegan minded you are after then The Eco Collective has plenty on offer here too.  A row of eye catching t-shirts from Newquay based Generation-V line one wall whilst the display of stone craft, pottery, illustration and photographic work in the window and further inside the shop offer colourful, original and creative ideas from local like minded individuals and businesses.

The Eco Collective strives to bring small sustainable focused businesses together under one roof.  It only opened its doors on Wednesday and already the stock reflects what talent, both from a creative and a culinary point of view, there is within Cornwall.  Its stock is set to grow even further as more and more vegan and sustainable businesses open and come forward to be part of this exciting  new venture in the heart of Cornwall.