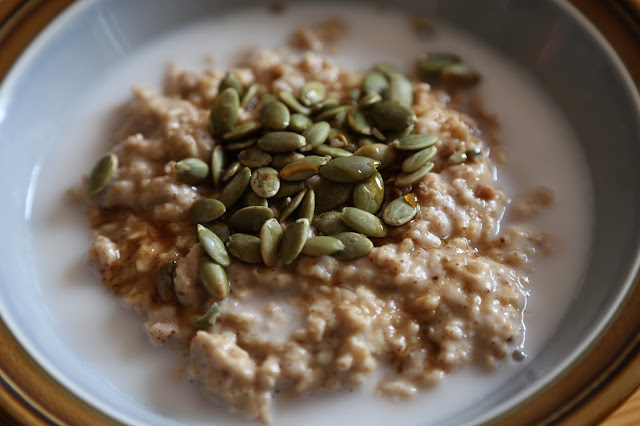 I was planning a good attempt at working in the front garden today.  After all it wasn't raining and there was no point trying to drive anywhere on a bank holiday Saturday in Cornwall so I was all out of excuses for not getting on with it.  I needed fortification of a healthy kind first though.

I remembered a porridge recipe I had seen in the July/August edition of Vegan Life magazine.  It was for Banana Bread Porridge.  It just so happened we had an overripe banana itching to be used so I thought I'd give this recipe a go.  It was just the thing.  The almond butter  and banana added a creaminess to it beyond your usual bowl of porridge and the maca, well hopefully that would give me the boost to take on the jungle out front. We were all out of goji berries but had the suggested pumpkin seeds.  I did take the liberty of slightly dry frying those before sprinkling on top though as I thought it added a little extra nuttiness.  Oh and we did drizzle some Bee Free Honee over the top too and an additional slurp of almond milk too.

So after my lovely breakfast I did go out in the garden and remained there for the rest of the day, accompanied by Phil between surfs and a little baby robin between worms.  I certainly must have been super powered by the porridge as I lost all track of time.

The original recipe comes from Joe Jackson (joejacksonnutrition.com) and I happened to find this Banana Bread Porridge recipe on his website for all to see (his recipe has bee pollen in it though which wasn't mentioned obviously when it was reprinted in Vegan Life).  It is well worth a try especially as it takes less that 10 minutes to put together and tastes pretty damn good.
Posted by Scooby Gill at 9:35 pm