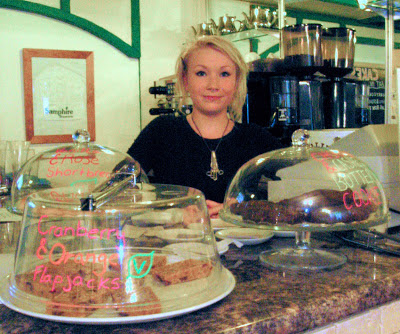 With the prospect of a rainy Saturday ahead of us we decided that a treat was in order to bring a little bit of sunshine to our weekend.  We left a drizzly Cornwall and headed the 50 miles east to cross the border into Devon.  We purposely skipped breakfast with the full intention of sampling the fares at one of the newest kids on the veggie catering block - Samphire Brasserie in Plymouth.

Opened in March this year by local vegetarians Becca Speare & Joe Wadge, I had only managed one quick visit previously so we were both looking forward to the opportunity to fully explore the food and atmosphere of this city based restaurant.  As soon as we stepped off the wet and grey streets of Plymouth and into Samphire we were instantly greeted by the vivacious, sunny waitress who clearly had both the knowledge and energy to represent all that Samphire inspired to offer.  This made us feel, along with the light, clean but nicely quirky interior of the restaurant, like the sun had started to come out on this otherwise damp June weekend.  All this before we had even studied the menu.

All of Samphire's menu is vegetarian and at least half is marked as vegan but they 'don't shout in your face' about their virtuous veggie ways and, with items like 'chicken', 'black pudding' and 'fish and chips' appearing on the menu,  the uninitiated could be forgiven for assuming it wasn't a vegetarian establishment.  This is stealth vegetarian and vegan cuisine; the kind of place you could take carnivorous friends before they even had a chance to complain about the lack of meat.  Some veggies and vegans may have issues with this and I do remember reading banter about this on Samphire's own Facebook page in the early days but as long as the food that is offered is vegan and tasty, I personally have no issues (see our previous blog post about this very issue - Really Alternative). I applaud their efforts to make all dietary choices comfortable with the food they offer, especially if it encourages people to give up animal products.

After several long moments of indecision and dithering, Phil and I finally decided on what we were going to have.  Phil opted for the vegan all day breakfast; a tasty plateful of smokey tempeh bacon, tofu scramble, lentil cake, beans, king trumpet mushrooms, tomatoes and toast at a reasonable £5.50.  This breakfast was certainly a break from the normal vegan breakfast offerings of hash browns, toast, beans and maybe some kind of sausage.

My choice was that of 'Fish and Chips'; vegan fish steak coated in cider batter, served with chefs ‘mushy peas’ & home made tartar sauce (£8.95).  Even after 25 years of being vegan I admit the thing I have missed the most is fish and chips.  I'm not sure after all these years I could accurately compare the taste to the real thing but regardless I was very much looking forward to sampling this vegan version.  I wasn't disappointed.  The big hunk of 'fish' in front of me was like a 'Veggie World' Salmon Steak but coated in a delicious crispy batter that I am fairly sure would have fooled Rick Stein himself!  Presented beside this stealth battered fish was a small 'frying basket' of home cooked chips which were exquisitely soft on the inside but tantalisingly crispy on the outside.  The tartar sauce was thick and creamy and a perfect accompaniment to both the fish and the chips.  I wasn't so sure about the chefs 'mushy peas' though.  As a dish on their own these harissa laced broad beans were tasty and very much appreciated by the chilli obsessed Phil, but as an accompaniment to the fish and chips, I would have preferred a more subtle and traditional version. 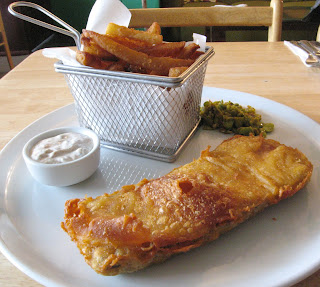 The proof is in the eating and both our plates were happily cleared with any evidence now sitting in our full bellies.  The only disappointment was that we had no room for any dessert but Phil did still manage to order a chocolate and cashew butter cookie for Ron (later' on).

There aren't many reasons to draw us to the 'big smoke' of Plymouth but it is clear that Samphire Brasserie is sure to become one of the main ones.  Plymouth doesn't really require a restaurant to have a niche market when it comes to vegetarian restaurants as, apart from the nearby Veggie Perrins, there is a lack of such establishments anyway.  However, with it's freshly cooked, creatively presented take on vegetarian British food, Samphire has managed not only to fill a vegetarian gap in Plymouth but has also created a niche market in vegetarian food in the south west in general.