It's Not Hard to Use Chard 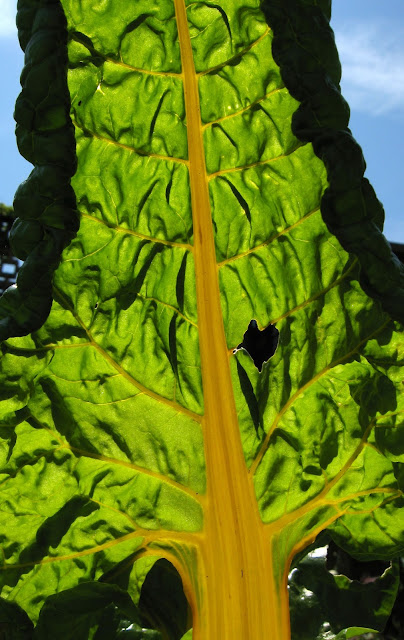 Last Autumn I planted what I remembered to be 'a bit' of chard.  It didn't do huge amounts over Winter but has now proceeded to explode in a rainbow of excess leaving us with the nice 'problem' of finding '101 Ways to Use Chard'.  So far, it's not been that hard; after all chard is tasty stuff.
In the last week we have had two chard culinary creations.

Firstly we tried 'Chag Aloo'.  If you are a connoisseur of Indian cuisine you would no doubt be aware of the spinach and potato dish of 'Sag Aloo'.  Well we decided to use chard instead of the spinach (Sag) and thus Phil created a 'Chag Aloo'.  The earthy robustness of chard stood up well in this mildly aromatic non-traditional version and it was well worth a repeat for future chard use. 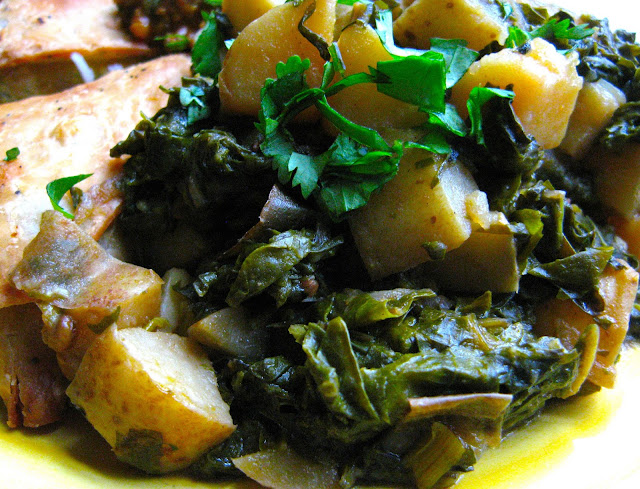 The second creation was more in my remit of cooking, being the oven baking, Mediterranean cook in our household.  I wanted to create a lasagna using the earthy intensiveness of the chard as one of the layers.  I thought the sweetness of roasted squash, parsnips and carrots, with rosemary chucked in for good measure, would be an interesting complimenting layer.  These layers together, with a 'cheesy' herby sauce on top, combined to make another tasty use of our rainbow chard. 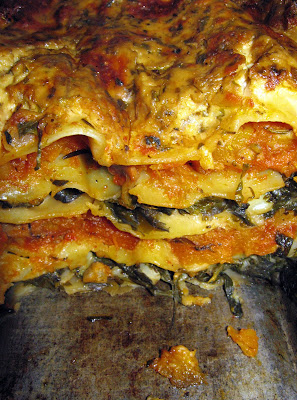 Chop the veg up into smallish even bits and chuck in a roasting tin with the rosemary, salt, pepper and olive oil.  Roast until soft and slightly browning having stirred a couple of times during cooking.  This usually takes about 30 minutes in our oven at 200 degrees C.  Once cooked, take the bigger sprigs of rosemary out but if any leaves are left in that's all good.  Mash up roughly.  Now at this stage you could add any other flavours in you like.  I added a bit of sun dried tomato paste, a bit of smoked paprika and a wee bit of garlic paste (don't tell Phil!).  Have a rummage in your cupboards and fridge and see if anything you have may add to this mashed concoction.  Be inventive basically.

Meanwhile roughly chop the big pile of chard and pop it into a big pan with a splash of water in the bottom.  Cook on a medium heat, stirring to make sure it isn't sticking, until it has shrunk down and tenderised.  This will only take a few minutes.

Make a cheesy sauce at any point whilst everything else is cooking!  Heat some oil up in a small pan and before it gets too hot, stir in the flour, nutritional yeast and nutmeg until it forms a ball. Cook for a minute stirring constantly then carefully (as it may spit) little by little add in the soya milk.  Keep stirring to incorporate the soya milk each time until the desired thickness is obtained (I'd say the consistency of a pourable custard is about right).  I like to add in a splash of balsamic vinegar and Braggs at this stage.

Now build your creation.  I use a loaf tin but you can build it up or across in a shallower, wider dish if you prefer.  Oil the dish and then put down your first layer of lasagna.  Then add a layer of roast veg, then another lasagna sheet, a layer of chard, and another lasagna sheet.  At this stage I add in a small layer of sauce and then continue with the layers.  Then slather the rest of the sauce on top.  I then stirred in some oregano and additional yeast flakes into this top sauce layer.

Cook for about 30-40 minutes (200 degrees C) until slightly brown on top and bubbly.

PS.  Whilst the oven is on make the most of it and cook up other delights such as cakes and biscuits.  It's more environmental that way!
Posted by Scooby Gill at 11:33 am