We don't have loads of soya products but even so, sometimes we still think it is too much.  Seitan (wheat gluten) is a soya free alternative but it's not too easy to find in these parts.  Ironically you can get it really easily in supermarkets in 'meat loving' Portugal; pre-packaged and ready to go.


I have made seitan from 'scratch' before but it is quite time consuming.  Recently however, we found this great Seitan Fix Mix from Vegan Store.  We initially bought a small 250g package (£1.59) to have an experiment with and having had some tasty results we then went all out and bought two 1kg packages (£4.89 each) for our store cupboard.  It really is a very cost effective and interesting product to use and we thoroughly recommend it.  Check it out on Vegan Store here.


Recently we made some 'chicken' seitan which we then incorporated into a creamy nut korma.  It was pretty yumski.   We had plenty of 'chicken' left so are having more of it tonight in another culinary creation.  One thing that is missing from the Seitan Fix Mix package are instructions of how to use it but here is what we did to make 'chicken'. 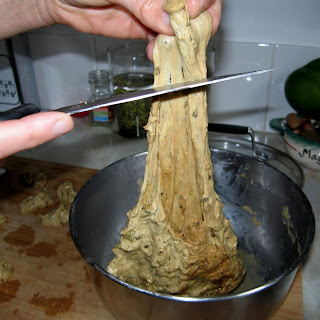 Seitanic Chicken (makes loads!)
2 cups of Seitan Fix Mix
1 cup of nutritional yeast flakes
4 tsp onion powder
4 tsp dried sage
2 tsp dried thyme
3 tsp celery salt
8 tbsp tamari
2 cups water
Add all the dry ingredients into a bowl and mix up good and proper.  Then mix in the tamari
Add the water bit by bit until it forms into a 'dough' (see photo).
Divide into whatever forms you fancy (we did little 1" chunks) but bear in mind it expands once cooked.
Boil in enough water to cover for about 45 minutes.
Use straight away or store in the fridge (preferably in the resulting broth from the boiling).
So give it a try!  Let us know if you come up with any interesting creations yourself!  I'm sure there are plenty more for us to try out.
Enjoy!
Posted by Scooby Gill at 7:23 pm