Following on from our trip to Plymouth, we moved 25 miles further east to get a 'Totnes fix'.  With a good mixture of health food stores, book stores, veg friendly cafes, charity and independent shops, thrown in with a colourful mix of unusual and alternative thinking characters, Totnes can be just the right tonic for bringing you out of your every day bubble.
It had been a little while since we had been here and things had changed a little.  For a start, some of the traffic was coming the opposite way down the one way High Street!  Not sure what that was all about.  There was also a noticeable mix up of shops.  Some had sadly closed down, alternatives had opened and some shops had moved.  Arcturus book store had moved across the road and their previous premises replaced by a cafe. We thankfully discovered that Drift Record Shop hadn't just closed down as we had believed on our last visit but had instead moved up to bigger premises at the top of the High Street.

Hallelujah for independent record stores like Drift where you can have that old fashioned but totally enlightening experience of educating yourself about new releases and exciting non-mainstream music.  Take a look at their website to get the idea and if you are in Totnes, make sure you make the trip right to the top of the High Street.  It'll be worth it.  Lovely people too.
Drift Record Shop

A couple of purchases on (new albums from Laura Marling and Boards of Canada) and after tearing ourselves away from Drift we continued down the High Street.  About two thirds of the way down we discovered a new venture called the Totnes Cats Cafe.  I had heard about these kinds of places in Japan where the resident cats act as a therapeutic distraction to the customers.  Despite my recent cat centric posts, I am actually more of a dog person but having two cats sharing my work and home life (even though I don't 'own' them) has made me appreciate the benefits of having these fur covered independent spirits around. 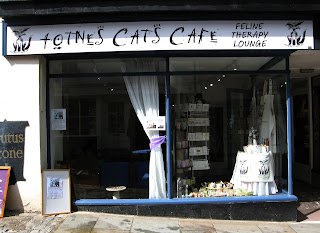 Having looked into the cafe a little more, it turns out that this is Britain's first cat cafe and it has come under some criticism by Cats Protection - see here for more details.  Both sides of the debate have valid points but I guess the only way you would know for sure is to go and see for yourself.  We only peered through the window and the two cats that we could see were fast asleep on chairs and nobody was fussing around them.  I know TC at work enjoys just hanging out with us and getting the occasional stroke and we like him hanging out with us.  It works for both of us.  As long as that is the case at the cafe, I can see no harm.  Profits also go to animal charities which is all good.  Read more about the cafe here.

Too soon it was time to head out of Totnes and back to Cornwall with a bag full of Greenlife goodies .  It is a shame we have to travel so far to get that 'only in Totnes' fix but then again I guess that is what makes it special and unique. Where we live is also special and unique; just in a different way.
Posted by Scooby Gill at 9:01 pm