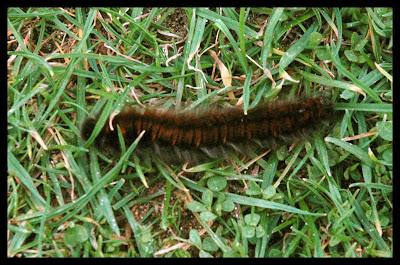 It had been a while since we had stomped around our own territory and with miles of National Trust coastline on our doorstep, that was shameful.  So Saturday afternoon saw us taking off seaward despite dark clouds constantly threatening.
Before we reached the sea we noticed a huge amount of hairy brown caterpillars on the surrounding grassland.  It seemed like every step we took, we had to take great care to not step on one.  They all seemed to be heading in the same direction too.  I had seen these caterpillars before around this area but never in such great numbers.  We found out later they were Fox Moth caterpillars and should really be hibernating in leaf litter between September to March, so maybe they had all been out partying and realised they were late and were migrating back to their favourite hibernation spot.
As we reached the sea and took to the cliff top the migrating Fox Moth caterpillars continued in profusion but we were joined by faster moving creatures on the seaward side.  Pairs of eyes followed our procession and when we stopped to sit on a rock to watch them, they moved closer to come and stare at these crazy creatures called humans.  These were the Polly Joke seals and you would be very unlucky if you didn't even catch a glimpse of them along this stretch as they have a colony just around the corner.  Unfortunately I didn't have a long lens with me so I didn't manage to capture their curious bright eyes to their full potential. 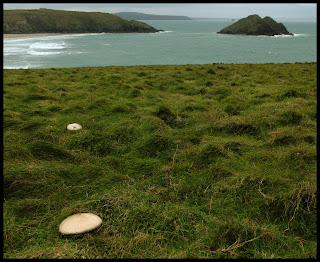 With dark clouds looming and a few drops of rain sporadically falling, we left the gaze of the watery dogs below and continued around the coastline.  Here we started noticing the remnants of various species of mushrooms scattered amongst the short tufted grass.  Then we spotted the clean white tops of fresh field mushrooms and cursed ourselves for not bringing a bag or container to carry home what could have been dinner for that evening.  There were plenty more on the way though so a day trip perhaps in a couple of days for Phil may result in a larger harvest. 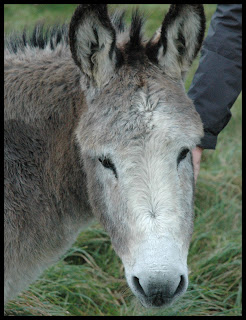 It was time to turn back inland and across the common.  Sadly we had failed to see any foxes or choughs, as we had on previous occasions.  We had once even caught a scant glimpse of a mysterious creature in deep undergrowth on a small stream that we could only surmise must have been an otter.

However, our walk still had a random surprise for us in the form of a donkey.  Not terribly exciting you might argue but this donkey was hanging out with the herd of cows that frequent this part of coastal common land.  It was quite happily part of the gang and hey, donkeys also have that special way of making you smile, especially when they let you vigorously rub their over exaggerated ears.
Posted by Scooby Gill at 6:44 pm