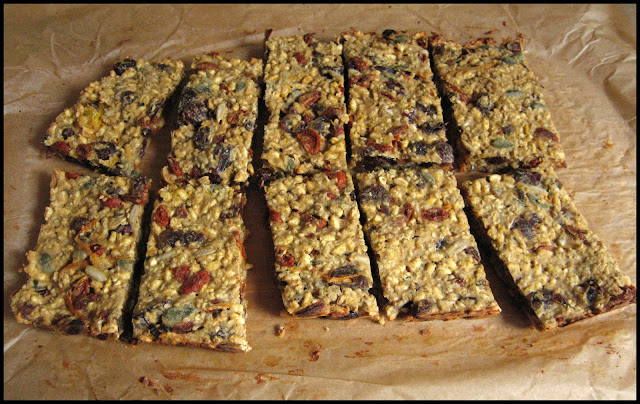 Sometimes it takes me a while to catch up with making recipes and this one has taken me a year, but I got there in the end!  You see when I've read Vegan Life Magazine from beginning to end, I then write down on a list every single recipe that takes my fancy, with the edition it appeared in and the page it was on.  Yes it is slightly obsessive, but it does mean that when I have time I can consult my list, and those lovely recipes that appear in each edition that I never had time to make don't then go to waste!

I was looking for a healthy snack to make for pre or post workout and this one, which appeared in the March/April 2015 edition, fitted the bill.  It was really quick to make and the other thing I like about it is that it is really adaptable to your store cupboard supplies.  We always have dried fruit and seeds, but often different ones at different times, and this recipe allows for that.  We also didn't have any puffed quinoa, but we did have some puffed rice so all good there too.  The only thing that I actually bought to make them was the yogurt and it was pretty unusual we didn't already have any in the fridge.

The recipe is actually originally from Provamel and I managed to track it down online so you can see it in all its full glory on their website here - Vegan Power Bars.  There seems to be loads of other lovely recipe offerings on their website too so I shall be investigating some of these over the coming days.

Power up and enjoy!
Posted by Scooby Gill at 8:20 pm