Wish You Were Here

So we are on our annual camping trip to Portugal.  Bags and car packed with tent, stove and various assortments of probably unnecessary comforts, we had done the 19 hour ferry journey from Plymouth to Santander, Northern Spain.   Cutting short our normal 11-12 hour drive down to the Algarve, we found ourselves 8 hours down the road in Portugal, somewhere down the dusty back roads of Nazaré.  It was dark and we were tired and above all else lost.  We were looking for North Canyon Bungalow, a tent free 2 night luxury stop off we had on impulse booked a few days previously.  It had sounded different, slightly  ‘off centre’ from the usual dreary, homogeneous ideal of accommodation that the tourist drones go for.  It sounded right up our street, if only we could find that street.

A phone call to owner Marco brought him out personally searching for us and swiftly escorted down the truly unobvious dusty track to salvation for us from the long road.  We were instantly introduced to Jim Morrison, who uncurled his chunk of chocolate brown head from beneath his tail to raise his deep brown eyes and thud his heavy tail in greeting.  Marco told us that Jim was tired from chasing the chickens and pigs all day but Jim didn’t look like the kind of dog who would waste his intellect on such matters.   He had other matters to dwell on, such as the night time perimeter security and the next day’s tourist guide duties to plan; a truly rough and tumble Portuguese outdoors trail hound. 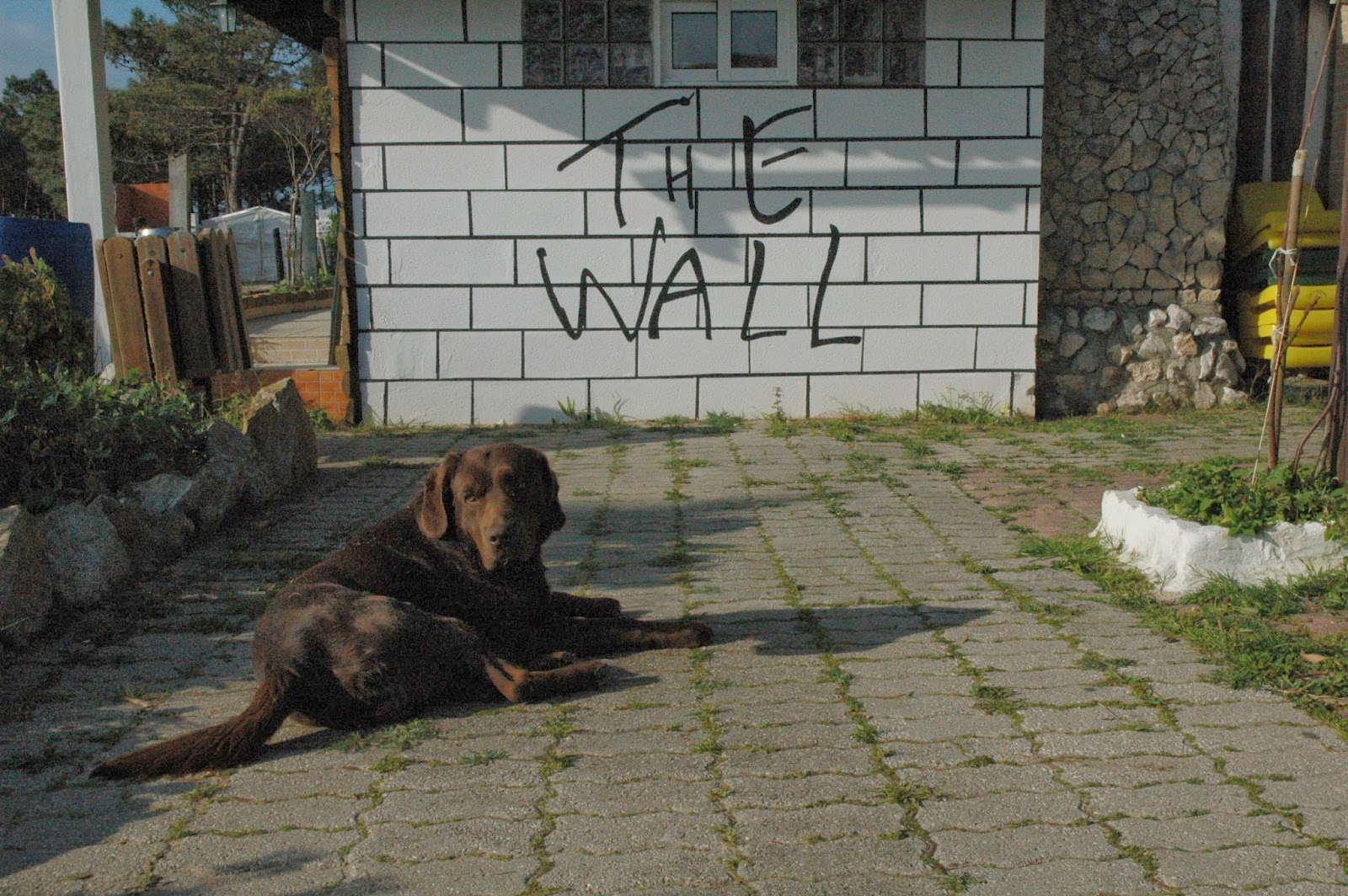 We followed Marco to our accommodation, past a rendition of Pink Floyd’s ‘The Wall’ album cover, taking up the whole side of his house.  Clearly it was emerging Marco was a man of taste when it came to music.  A quick unpack of our essentials from the car and just before we were about to reluctantly contemplate cooking our evening meal, Marco reappears with a steaming bowl of homemade soup and bread.  He didn’t know we were vegan, so a few seconds of slightly embarrassed questioning on our behalf of the ingredients of said soup revealed with relief that this amazing and warming offering from Marco was indeed vegan.  We were so grateful and even more so once we had tucked into it as clearly Marco’s good taste extended even further beyond just music.  It was exceptionally good soup and this simple kind gesture of a meal at the end of our long journey was more than perfect.  Whilst we sat eating our meal and drinking wine on the still warm steps outside our bungalow, staring at the stars, we couldn’t help but feel we had fallen on our feet. 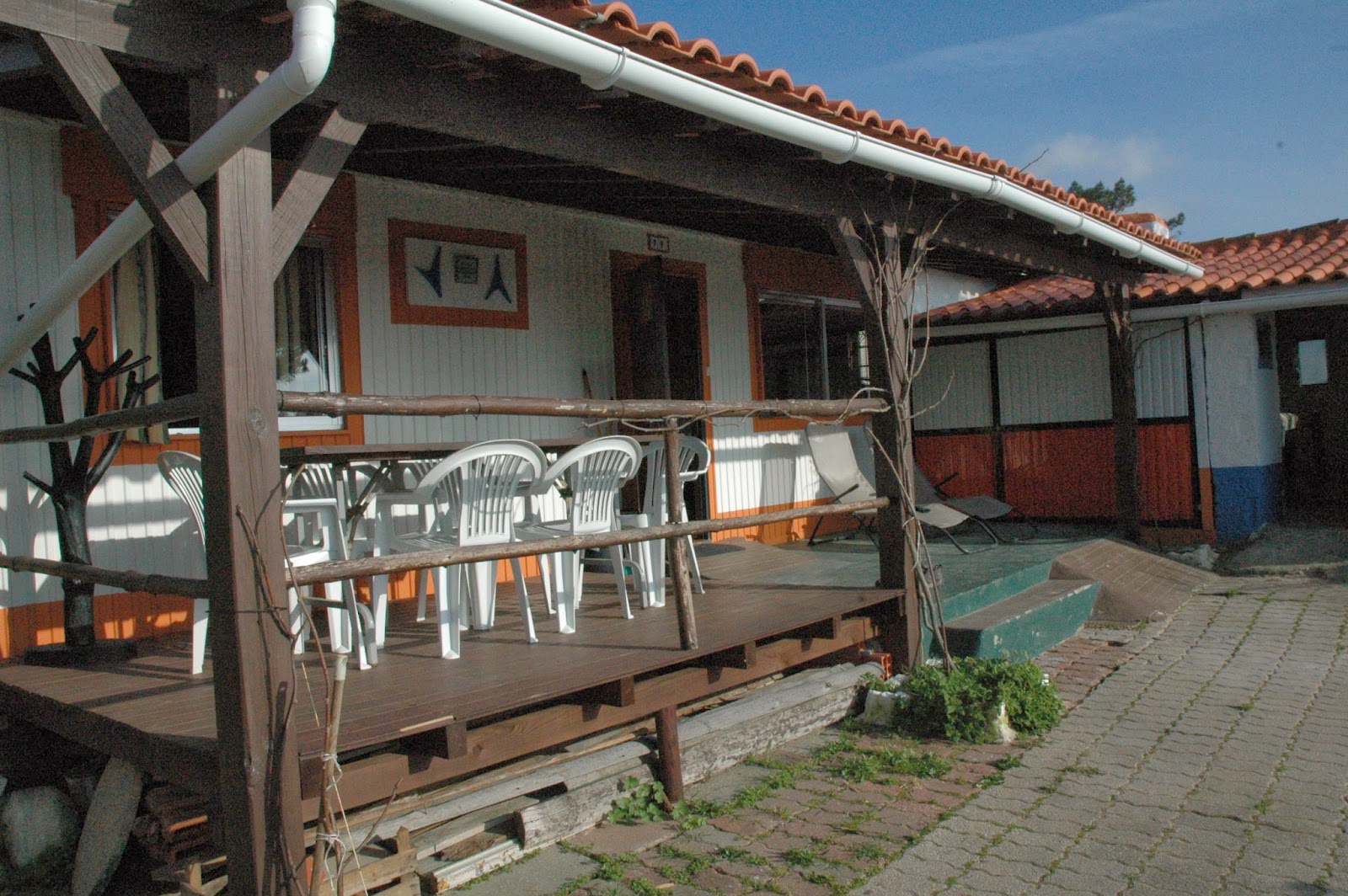 Our bungalow overlooked the now world famous ‘big wave’ spot and certainly overnight, despite the strong wind, we could still hear the waves crashing against the shore.  The next day we explored the local area on foot.  We weren’t sure which path to take at first but Marco told Jim to show us the way.  He referred to Jim as the ‘tour guide’ and he did a great a job in showing us the right tracks to reach the fort on the headland through the pine scrub land.  This was not without incident however as he was very nearly ‘dog-napped’ by a passing black BMW luring him to the car with shouts of ‘Bob’.  As Jim was clearly with us we questioned the driver who said he thought he was his lost black Labrador but just a bit dusty!  Jim wasn’t going anywhere near the car anyway as he is a free doggy spirit.  This was demonstrated further by the fact that his service was clearly one way only.  He had showed us how to get there; it was up to us to take it from there.  He had socialising to be done in the nearest part of town.  After a leisurely 6 mile walk taking in the sights of Nazaré, we returned to the bungalow.  Of course Jim was there to greet us. 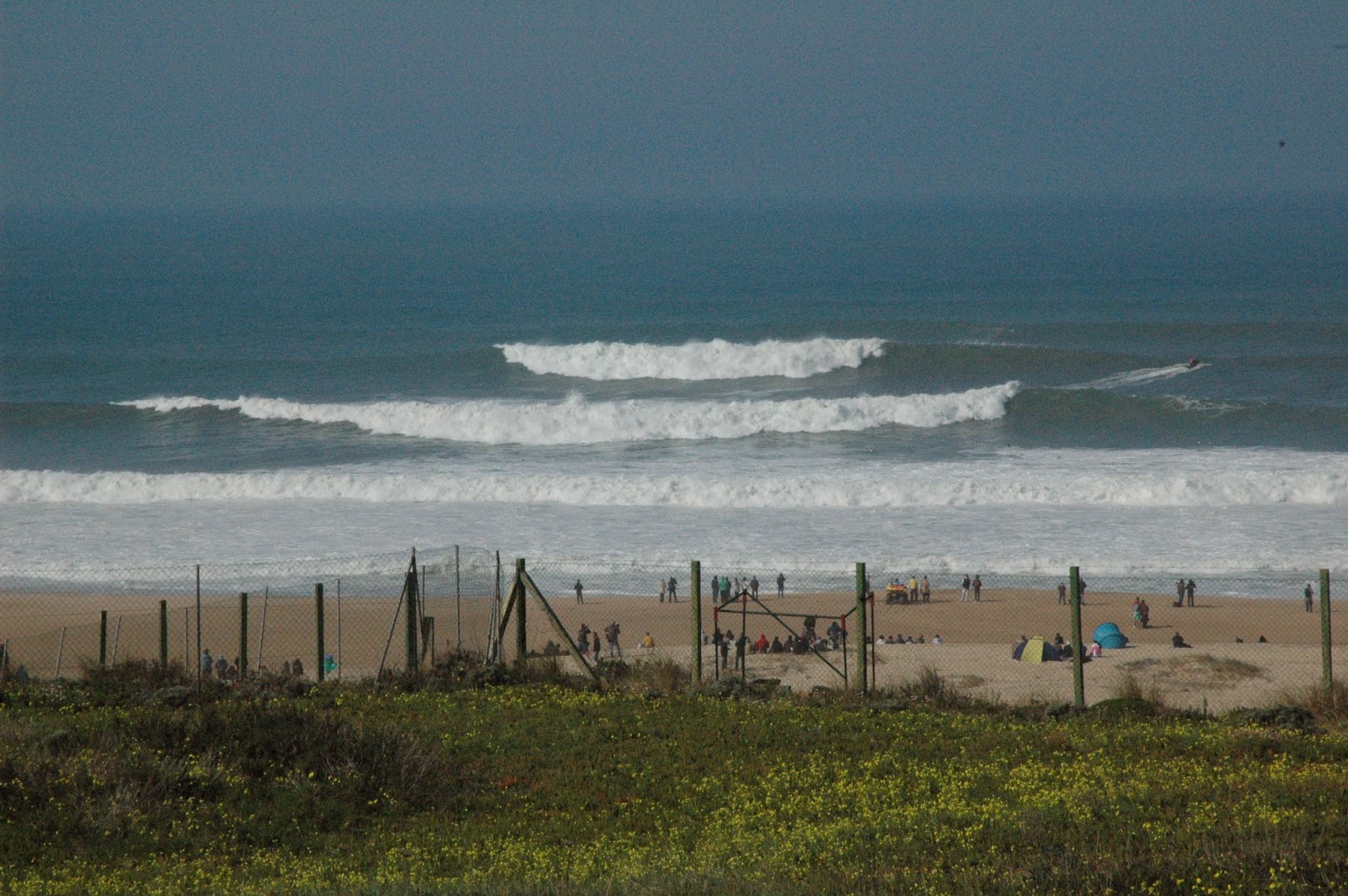 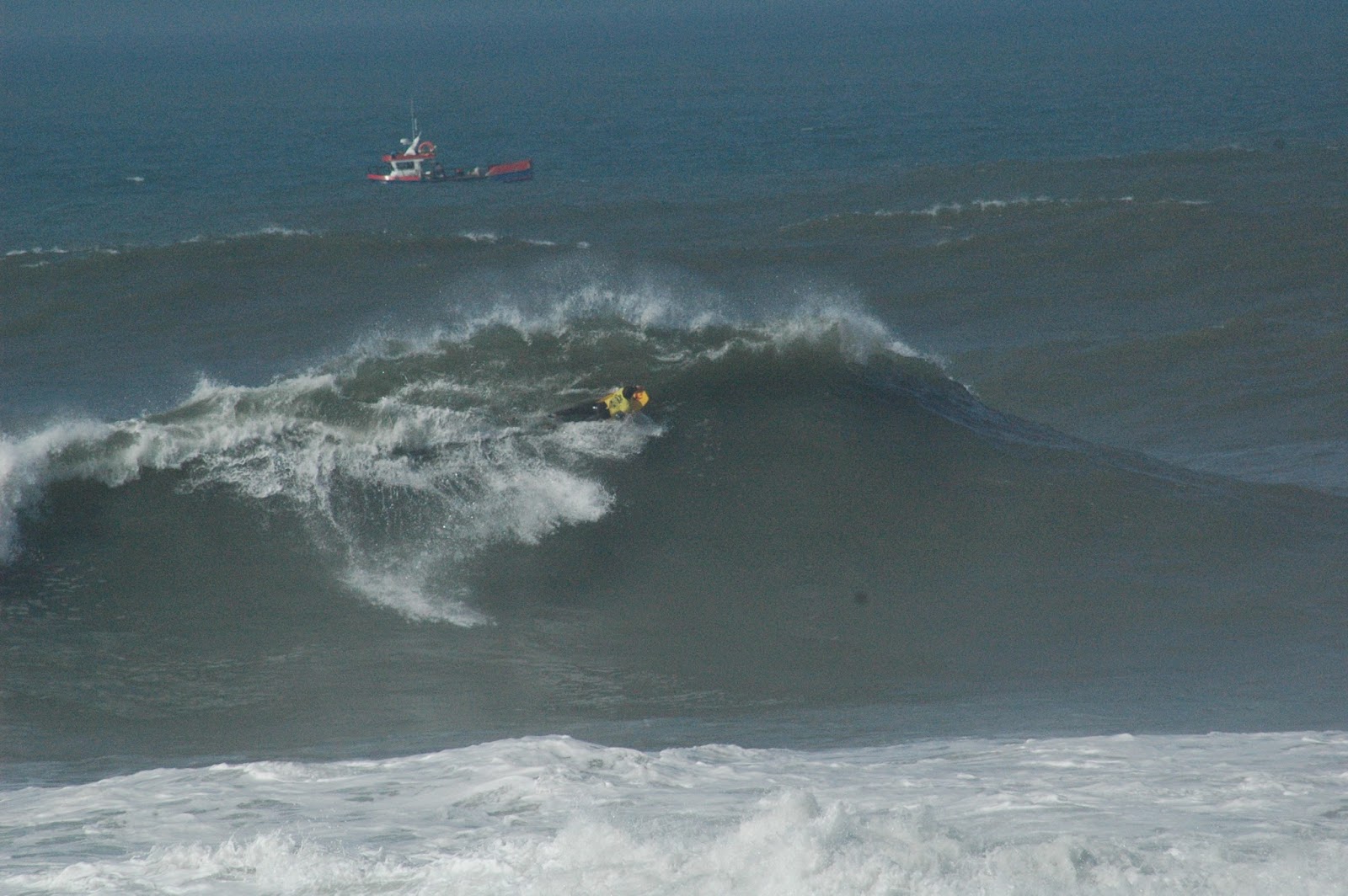 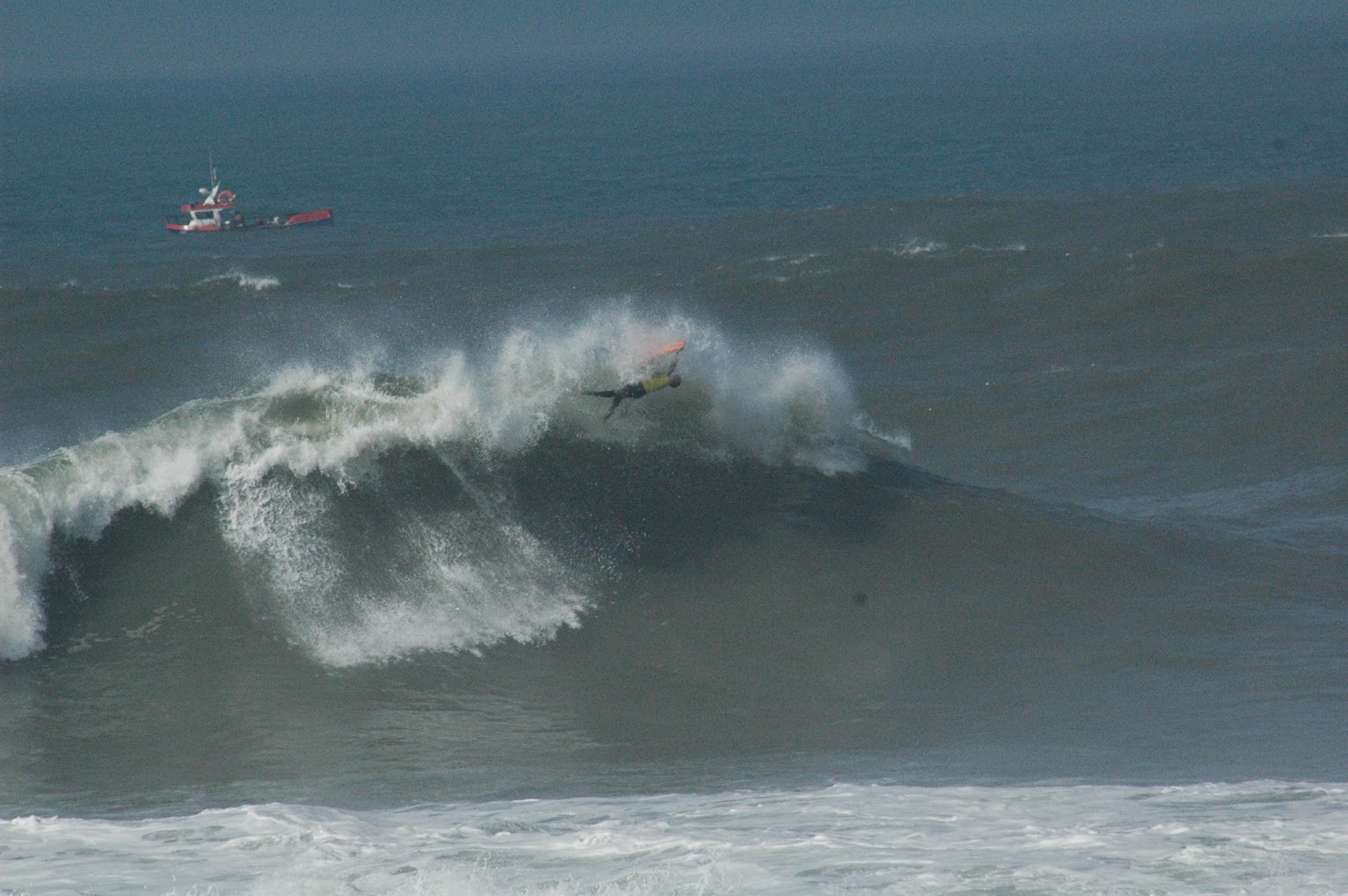 After another peaceful night, where the waves had been the only soundtrack, we awoke to much bigger swell and a large gathering of spectators and competitors on the beach. This explained the scaffold tower they were erecting on the beach the previous day. This was the Sumol Nazaré Special Edition 2014 Bodyboarding competition.  After a good breakfast and a quick pack up we decided to investigate.  Marco was already clued up to this happening and once more offered the services of Jim to guide us to the beach.  This was truly a big wave competition with competitors needing to be towed out there with jet skis.  Not a lot of waves were ridden but those that were, were quite spectacular with spectators oohing and aahing in all the right places.

We would have stayed longer watching but we were due to ‘check out’ by midday so were keen to head back to the bungalows and say our goodbyes.  Despite our attempts to lure him back, Jim was keen to remain on the beach and socialise with the thrill seekers. 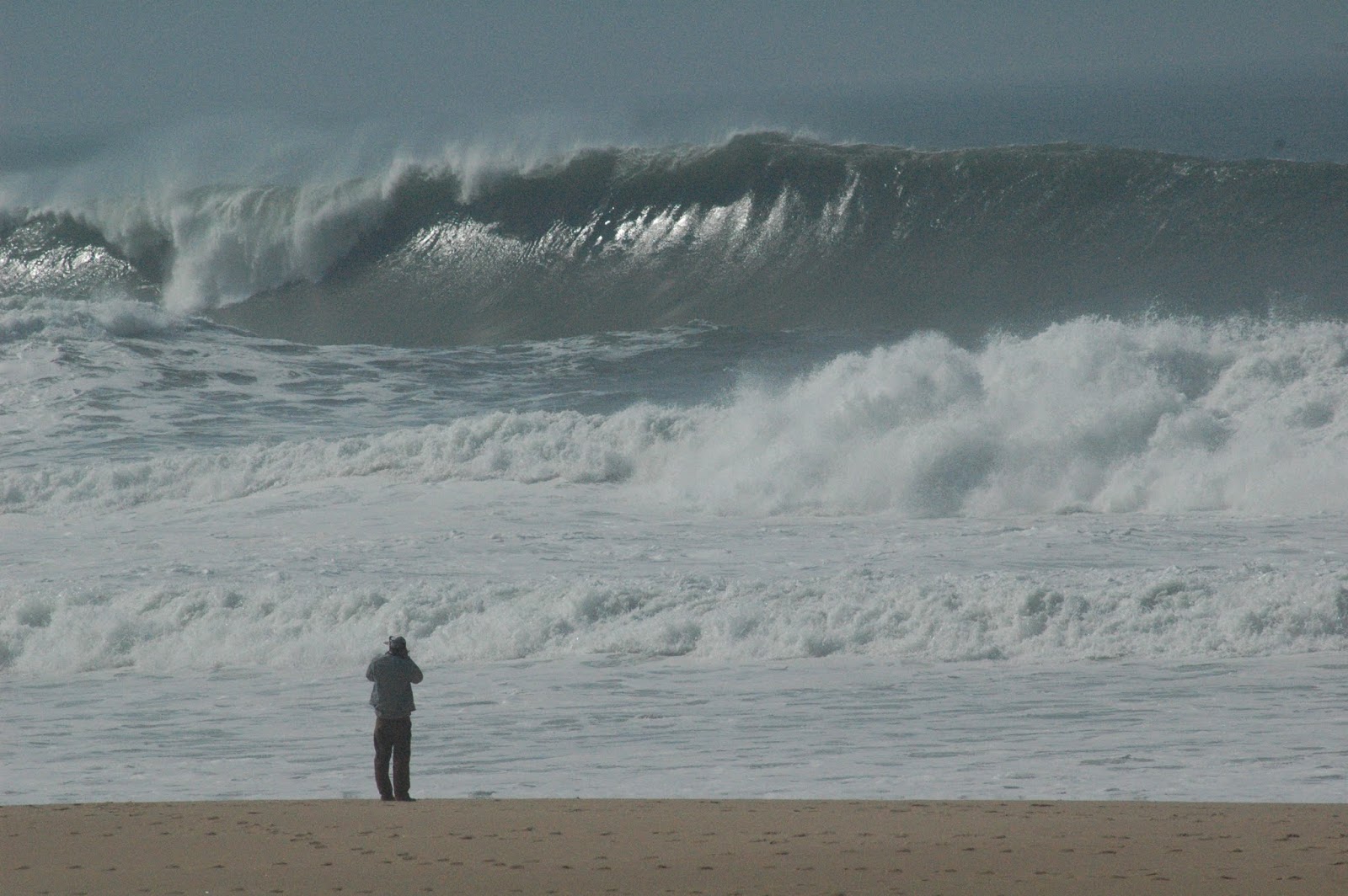 After packing up we went to say goodbye to Marco.  It seemed he was in no hurry for us to go and invited us inside his home for a coffee or a glass of wine, whichever took our fancy at midday.  It didn’t seem like we were there long but we covered a whole host of subjects of conversation (embarrassingly in English rather than Portuguese).  After establishing that our musical tastes were similar and putting the rest of the world to rights, we felt we had found a lot of common ground.  There was something about Marco that spoke of a different time, when the priorities of life were experiencing life itself rather than accumulating wealth.  Like us, perhaps he would have been more comfortable living in a perpetual 1960’s/1970’s ideal, when life was a lot simpler.  It is possible he recognised this same thing in us as his parting comments were around friendship and recognising ‘a shine in the eyes’.  Reluctantly it was time to go but we are sure we will return in the not too distant future.  In the meantime, shine on you crazy diamond.

To experience Marcos’ warmth and hospitality (and Jim’s tour guide services) please contact him on +351 910666509.   You can also view his accommodation via www.booking.com but we suggest you speak to the man himself.
Posted by Scooby Gill at 9:35 pm