It's a Nut Roast Kind of Day 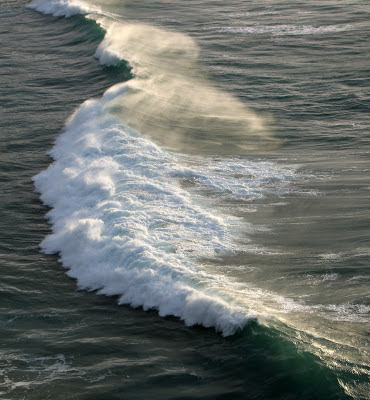 Today was the first day I have unearthed my hat and gloves from the depths of the wardrobe.  Not bad I guess for nearing the end of November and certainly the sunshine made the acceptance that winter was on its way a little easier.  We took off along the coast in search of sunshine glinted  waves, earthy edible mushrooms and our north coast choughs.  We found none of the latter two but plenty of the former.  We sat for a while in silence watching the lines of surge advance, climb and collaspe against the off shore breeze in sparkling arrays of white water and spray.   The Cornish tinged songs of Martha Tilston ran through my head as I searched the sky for the whirling playful dance of the choughs.  Seagulls instead swept across the lyrics and gentle melodies that brought the scene infront of me into filmic storylines until the shadows stretched and weakened with the fading light.  We reluctantly headed back along the coast.

We had discussed before we left what we were going to have for dinner this evening.  Curry had been the result, an unusual choice for a sunday as, despite being far from traditionalists, we often succumbed to a warming roast on autumn and winter sundays.  It was proving hard to resist especially when Phil suggested that it was 'a nut roast kind of day'.  That sealed the deal and with that our pace quickened.  I was only briefly distracted from the pace when I spotted the scene below me from the edge of the cliff.  An azure blue rockpool was outlined by sandy footprints of the equally curious, like animals to a watering hole.  The fascination of rockpools to people is undeniable but not always explainable and it brought back into mind one particular song by Martha about rockpools in Cornwall. 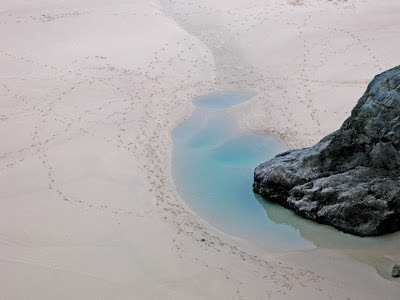 On returning home, the oven was set to heat up and on went Martha to bring those filmic Cornish scenes flooding into our kitchen whilst potatoes and carrots got peeled and todays incarnation of nut roast devised.  No two nut roasts are the same in our house.  I never write the recipe down, it just somehow happens.  A crust of bread slung in the blender, a few handfuls of whatever nuts are in the store, some herbs, a bit of mustard (don't tell Phil!), a bit of tomato puree, a bit of balsamic vinegar, bit of olive oil, water and anything else that I suddenly think deserve to be part of the mix on that particular day.  Then it is scooped into oiled baking implements (sometimes a loaf tin or sometimes just individual small ramekins) and slung in the oven for 20 minutes or so.  It certainly fills those gaps carved out of my appetite by windy wintery lungfuls of sea air during sunday afternoon walks.