Returning To The Kitchen With An Epic Lasagne Session 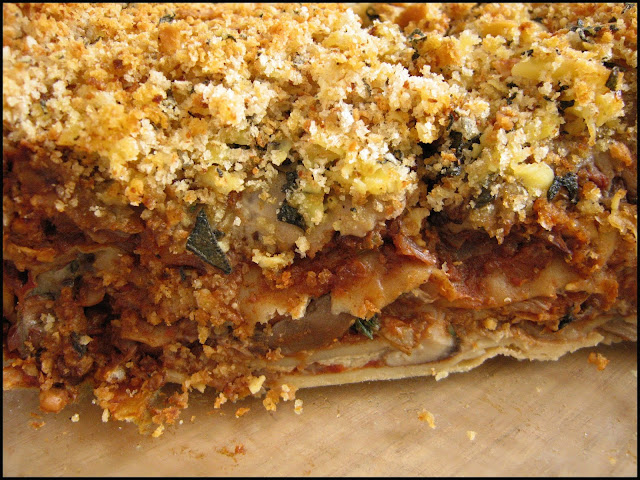 I've always loved cooking but over the last couple of years have suffered from a severe lack of time and motivation to do so.  I've had the odd session here and there but for the most part, if it hadn't been for Phil stepping in and feeding us, there might not have been much left of me.  As I slowly climb out of a long period of grief and stress my interest is returning and my groaning shelves of recipe books and folders of collected recipes are looking a little less dusty and neglected.  Basically Phil will be relieved to know I am working on it!

The weekend saw me undertaking a recipe picked up from watching an episode of Jamie and Jimmy's Friday Night Feast quite a while back now.  It was a fully vegan episode and featured the vegan comedian Romesh Ranganathan being cooked his ultimate choice of dish - a vegan lasagne.  I love lasagne too and normally just freestyle it without the need for a recipe but this one did look potentially epic.  It was even called Romesh Ranganathan's Epic Veg Lasagne.  As it also used homemade pasta, it would encourage me to 'dust off' our pasta rolling machine too.

We dutifully shopped for the few specific ingredients required outside of our pretty epic store cupboard supplies (everybody round to ours if Brexit causes more havoc than it already has!) and started early on the multiple step recipe.  Despite the traditional accompanying tunes to dance to and glass of wine to sup, I in no way slacked off in my concentrated approach to this recipe.  I got on with it, even preparing parts of the recipe earlier on in the process than indicated to try and save time.  The pasta making part was actually very quick, but even so the whole process was extremely long.  I think it goes to show how effective editing can be on the television!  It was gone 9pm before we sat down to eat.

That said, and in fairness, the recipe intro does mention it is a labour of love.  It was really tasty and filling too and a recipe that no doubt would get quicker each time you make it.  I halved the recipe but I must say I wish, given the time it did take, I'd made the full amount and then frozen the other half for a tasty homemade, no fuss mid week dinner.  The only deviation I made was by adding more cheese.  I just couldn't help myself.  The amount in the recipe just seemed too little amongst the other bold flavours and I have to say I am glad I did as it turned out a nice balance.  We used Koko Cheddar Cheese by the way.  It doesn't say in the recipe itself but both further investigation on social media, and indeed the comments at the bottom of the recipe, indicated that was the one he used so we wanted to stick to that.  It isn't our favourite cheese but it worked well in this recipe and our favourite, Vegusto, is now difficult to get hold of and really expensive.

So was it worth it?  Yes, is the answer.  It was worth it on a few levels.  Firstly, yes, it was pretty tasty.  Even if I didn't commit to the time for the full recipe I would definitely take elements of it when I next freestyle my own, such as blending mushrooms with the white sauce and adding a cheese, sage and breadcrumb topping.  In addition it got me making fresh pasta again, and I had forgotten how simple, quick and far more tasty it is.  Most of all though, it got me back in the kitchen, slowing down to appreciate the creativity that is the kitchen, and cooking for my wonderful and much appreciated fella that is Phil.
Posted by Scooby Gill at 7:26 pm