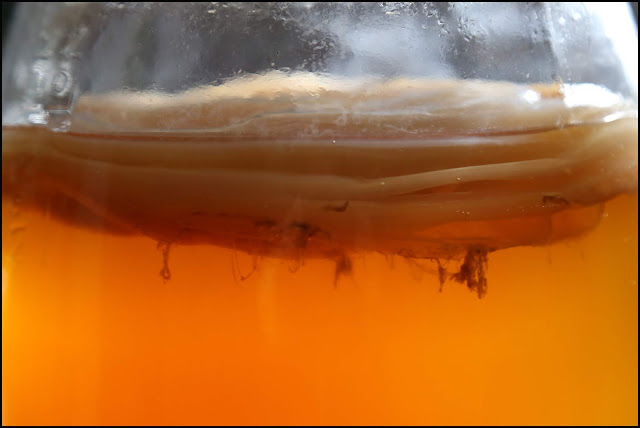 If you've been to a vegan fair recently or perused the chilled drinks section in a health food store you would doubtless have seen kombucha.  Even some supermarkets are selling it now.  This healthy ancient beverage has really taken off, particularly in the last two years or so. 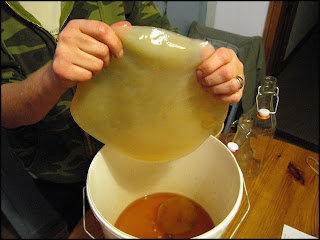 Kombucha is simply fermented sweet tea. To some that may not necessarily sound that appealing and even less so when you see the scoby; the jelly like pancake shaped culture that is responsible for the fermentation.  Without going into the science behind this (whole books have been written on this) the scoby, which stands for Symbiotic Culture of Bacteria and Yeast, works its magic on the sweetened tea and the result is a surprisingly tasty and refreshing drink.  Less tea like and less sweet than the sweetened  tea ingredients would lead you to believe, kombucha is more apple/cider like, perhaps with a hint of champagne, in its base form. In addition, the multitude of different flavouring options possible can lead it into even more tasty and interesting directions.

It's not just taste that makes kombucha an increasingly popular drink in our modern world.  It promises health boosting qualities too, and is therefore a good alternative to the usual line up of shop bought sugary drinks (the sugar used to make kombucha is eaten up by the bacteria leaving only trace amounts).  Courtesy of the bacteria, kombucha is a rich source of probiotics so great for digestion and maintaining healthy intestinal flora.  This also goes a long way, coupled with the high levels of antioxidants and vitamin C, in boosting immunity.  Energy can also be enhanced by all of the above and the presence of a good amount of vitamins; predominantly a range of B vitamins.  In fact vitamin B12, supposedly elusive to vegans, makes an appearance in kombucha.  B12 isn't just purely available in animal sources, contrary to the 'propaganda'.  It is produced by bacteria and as fermented foods like kombucha are all about bacteria, it follows B12 and kombucha are good bed fellows.

I could go on about the reported health benefits; including its aid to natural sleep and weight loss, and helping ease the symptoms of high blood pressure, but I'm not one for science so it's best to do the proper research yourself.  What I do know is that during Dry January kombucha was very much a welcome and enjoyed alternative.  It had been suggested by a member of our family, also on Dry January, that we were cheating as, being as it is a fermented drink it does indeed have an alcoholic content.  This however is at such low levels (less than 0.5% generally in shop bought varieties but it can be a little more in home brewed creations), that a good chow down on rum enhanced Booja Booja truffles would probably give you more of a hit. 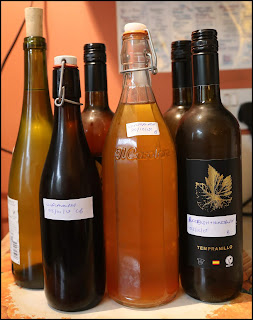 It might not have totally reached the masses yet but shop bought kombuchas are definitely on the increase.  On a recent trip to Somerset we saw two more brands we hadn't before.  I need at least two hands to count the different companies now providing for the UK market.  That wasn't the case even a few years ago.  This 2000 year old ancient beverage, with its roots in China, Korea, Japan and Russia (there are varying accounts of its definitive age and origin), was difficult to purchase.  We remember only one brand, Gavin's Kombucha, from the Totnes area, over 15 years ago.  That is one of the reasons we started making it ourselves, with the encouragement and a scoby kindly provided by Gavin himself.  We kept our brew going for some time but periods abroad and then my move to join Phil in Cornwall kind of broke the routine.  Now we are back to it.  Kombucha is really easy to make but routine (in our case weekly) is the key.  Sometimes Phil's sourdough starter routine and my kombucha routine coincide but it's no biggy.  Each process is just as simple as the other and take very little time.


In the case of kombucha you just brew up some sweetened tea (any black or green), let it cool and then let it get acquainted with the scoby. After about a week of the scoby floating around on the top, it is generally ready for drinking and bottling up.  You just repeat the process each time (using the same scoby) and you are assured of a constant stream of delicious kombucha.  The shop bought varieties are definitely very welcome and tasty and we encourage you to try them, but we have very much acquired a taste for making our own.  It's a lot easier on the pocket and resources too. 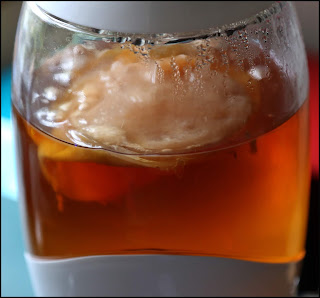 If you fancy having a go at making it yourself, apart from water, sugar and tea, the only other thing you need to get your hands on is a good scoby.  You can buy these from the Internet but do make sure it is from a reputable source to ensure the best quality.  The tradition however, as with sourdough starters, is that you pass on scobys to other people.  All you need initially is one scoby and it grows and grows, generally in layers which you eventually separate.  It is these layers that you can pass on.  Our newest scoby came from a friend and ex-colleague from the Lake District.  She sent several scobys to a group of us at work and now we have a little Kombucha Klub going where we all bring in our latest brews for each other to sample and compare.  The difference in tastes and styles goes to show the diversity kombucha has.

If you live locally I would be more than happy to pass on any available scobys if you want to start making it yourself; along with basic instructions.  For anyone else out there that can get hold of a scoby, my basic recipe is below.  I started off making this is in a bucket and indeed you can make it in lots of different vessels.  Glass is best but metal can react so it is best avoided.  Now I use my special kombucha jar which was a very welcome Christmas present from Phil.

Scooby's Scoby Basic Bucket Kombucha Recipe
You don't definitely need the 1 cup of kombucha but it will take longer before it is ready if you don't.  You can buy small bottles of kombucha in most health food stores and Waitrose supermarkets. 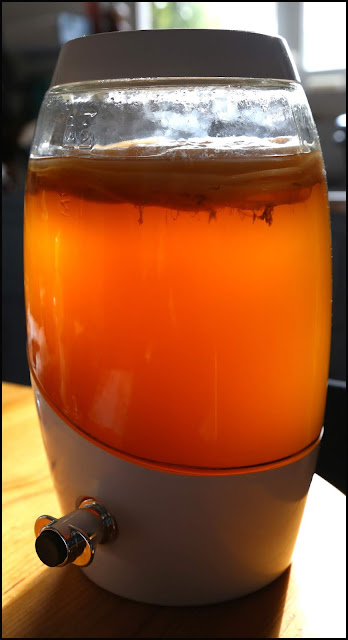 Ensure everything is all kept clean and that way you won't get any unwanted moulds.

Simply brew up the tea (either directly in the bucket if using bags or using some of the cups of water in a cafetiere if using loose).  Add the sugar and stir to dissolve.  Let completely cool down (otherwise you could kill the scoby).  It can be brewed strong but again, it is all about experimentation too.

Remove tea bags and then gently float the scoby on the surface.  The scoby has a smoother side and I always thought this was best to put upwards but having read more these days, it appears it isn't totally necessary. Don't worry if the scoby sinks, that is natural.  Cover it with a clean cloth like a tea towel. This allows air to get to it, essential for the fermentation, but keeps out unwanted dust or flies.

Leave it for a week then give it a taste (using a straw gently pushed past the scoby is a good way of doing this if you are not using a vessel with a tap).  It should have a hint of sharpness to it but still maintain a little sweetness.  Basically, if you like the taste, all is good! 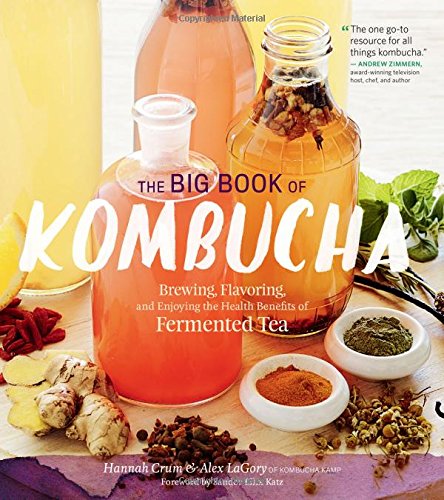 Most of the fun of making kombucha is in the experimentation.  I am still learning so much each time I make up a new batch.  I am also learning how some flavourings work great (adding strawberries or blackcurrants to the bottles after the first fermentation is a winner!) and others not so good (redbush tea really didn't work that well).

I've also been slowly dipping into the wealth of knowledge that is The Big Book of Kombucha along the way and have been discovering where else I could take my experimentations, along with discovering what I had been doing wrong.  I'd recommend getting a copy (I was fortunate to get mine for £2 in a charity shop!).

Whether you decide to try a shop bought kombucha for the first time or you decide you want to give making it yourself a go; enjoy!