A Short Break in Gloucestershire

With the holiday season fast approaching we've been taking advantage of trips away in our camper van before we get trapped by the flow of tourists into Cornwall (hence the lack of posts recently).  Our most recent trip saw us heading 'up country' to Stroud and the surrounding area, in Gloucestershire; an area we've never taken the time, until now, to investigate. 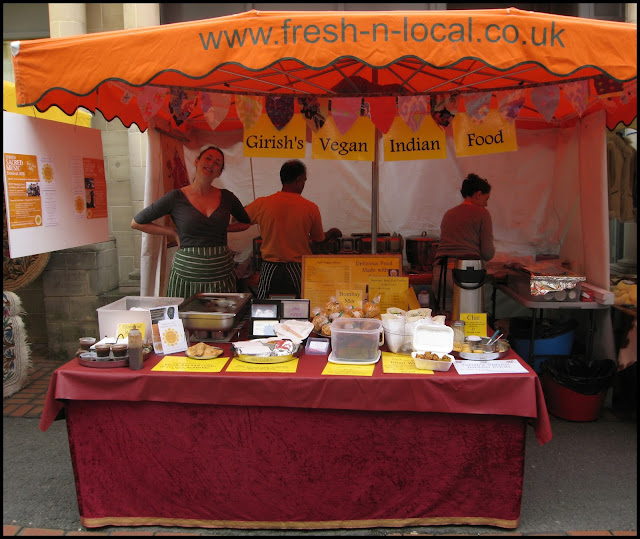 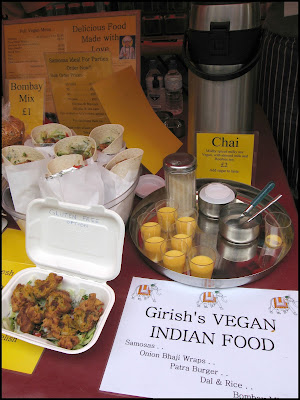 You know you've arrived in the right town when one of the first things you bump into is a vegan Indian street food stall.  The irony of this is that it was Bill, owner of Veggie Perrins (Indian vegetarian restaurant) in Plymouth, who first told us about Stroud, the town we now found ourselves drawn to.  He told us he'd heard Stroud likened to Totnes, an alternative, vegan mecca in South Devon.  It sounded like our kind of town.  It turns out his recommendation was right.

We'd parked by the railway station (refreshingly cheap parking charges too at £1.80 for all day) and immediately we were reminded that Stroud is the home of Ecotricity as we walked past a wall painted with their green union jack logo.  It was a good omen. We headed to the Farmers Market, passed Falafel Mama restaurant which sadly we ended up not sampling but we could clearly see it offered vegan options.  We continued up the road and bumped into a lady handing out flyers for an anti NHS privatisation campaign.  There was a fascinating and shocking exhibition of photographs highlighting specific examples of the underhand privatisation deals occurring out of sight and mind to most of us tax payers.  Even Phil, who works for the NHS, was shocked.  The film Sicko was playing that evening in the town hall as part of this community driven campaign.  We chatted to the lady and through her we sensed that 'Totnes style' passion for justice was strong in Stroud. 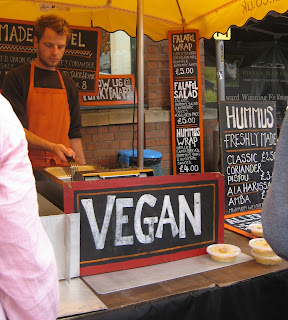 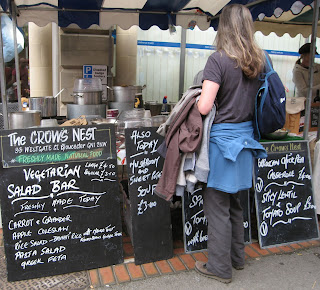 After this short and educational diversion we reached the market, and that is where we encountered our first vegan taste; Girish Patel's vegan Indian street food stall.  We were salivating and confused as to what we could fit in from the selection on offer.  A sample of lassi was delicious but the warming vegan chai won us over, along with the bhaji wrap, dhal, rice and samosas.  We sat gorging ourselves whilst sat on the little seats provided just opposite the stall.  We watched as frequent customers ordered food and chatted away, whilst hypnotic tunes resonating from the didgeridoo musician next to us played away.  We had to move on though as there seemed so much more to see. 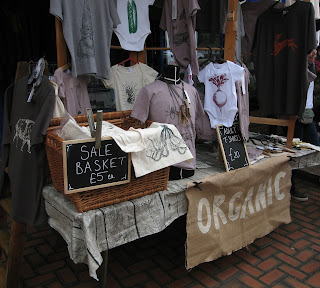 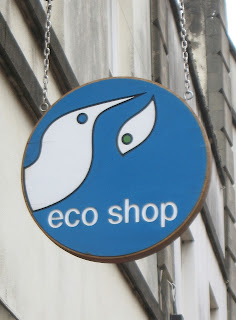 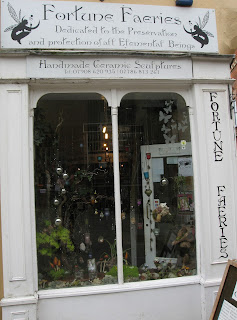 Olive stalls, pure apple juice stalls, another falafel option (with a big vegan sign), countless organic fruit and vegetable stalls, a salad and snack stall (again with vegan options displayed), an organic t-shirt stall, an organic beer stall, another stall with vegan Indian snacks and a vegan/gluten free cake stall (pretty much sold out by the time we got there); all frequented this wonderful farmers market in the middle of town. 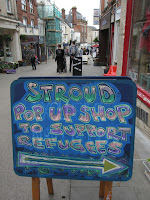 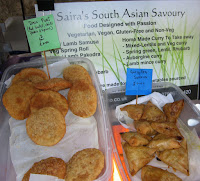 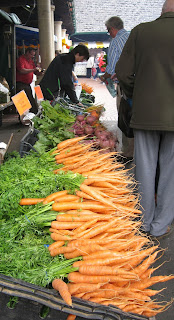 We continued to hunt the rest of the town for more 'alternatives'.  We found a great labyrinthine old style health food store called Sunshine down one of the enticing alleyways, another organic vegetable stall tucked away in a courtyard, an eco store, countless charity shops (including a timely one for refugees), a fairy shop, an organic hairdressers, a coffee shop that loans books (if you just write down your name and address), Woodruffs (one of the original organic cafes in the country), a fermented foods museum (sadly not open), a yoga studio and a vegetarian arts cafe called Star Anise. 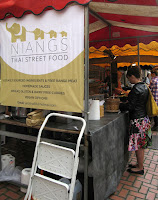 It was in the latter we met John Lyndon. John was a 76 year old retired taxi driver down from Cheltenham for the day.  He came to this cafe quite a lot and it was clear, when he asked to join us at our table for cake and tea, he was just searching for someone to 'shoot the breeze' with. He was a lovely fella and actually epitomised most of the people we met in this area; happy, talkative and friendly. 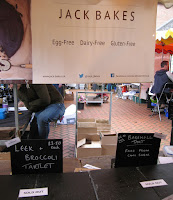 Stroud had been a hit with us and the Saturday Farmers Market (it closes at 2pm so get there early!) was a definite bonus.

With the evening approaching we decided to search for a suitable overnight wild camping option and after a successful recce with guaranteed good views, our thoughts turned to dinner options. We could have cooked but hey we were on holiday!

At this point Phil enthusiastically announced he had noted a place on Happy Cow nearby in Gloucester that would be rather wonderful to sample.  With that we headed off the 10 miles or so north to investigate Tangtastic, a veggie/vegan Chinese takeaway. 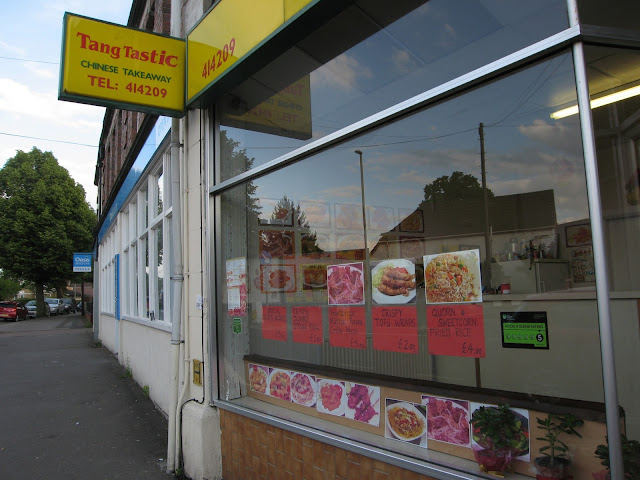 Yeah okay, it isn't the healthiest cuisine in the world as some things were deep fried, but by god it was tasty.  We hadn't had food like this since Tooleys in Plymouth closed down about 10 years ago.  If all Chinese food was as tasty (yet MSG free) as this then we'd eat it a lot more often.  We'd read the 5 star reviews on Happy Cow, and were pleased to find that the food was as good as expected, with the staff happy to advise on any substitutions needed to make everything vegan. We started with satay skewers, and quickly moved on to red bean dumplings, then the rest of the main courses we had ordered:  a selection of rice, noodle, and 'fake meat/fish' dishes that were all really good.  We got a bit carried away with the amount we ordered, but Phil was more than happy to eat the leftovers for breakfast the next morning.  If only there was a Tangtastic in Cornwall.

As a new dawn greeted us high up on a sunny Gloucestershire hill overlooking the Bristol Channel, our minds turned northwards to the wonders of Wholefood Market in Cheltenham. We'd been here before en route up north so knew it was worth a visit.  Think health food store pumped up to supermarket size.  It is well worth a visit if you are up this way.

Also worth a 'pit stop' is the Gloucestershire Services on the M5.  I only wanted a wee but a whole new motorway services experience greeted us with sustainable building designs, local produce and home cooked style food.  No sign of a Muckdonalds or Starbucks here. If you are having to stop at a services on the motorway, this would definitely be one to cross your legs and wait for!

Our journey from here then took us into the Forest of Dean and just over the border to Wales.  However, we could really have spent a lot more time in Gloucestershire and know for a fact that we have only just touched on a few of the vegan wonders of this area.  We will no doubt be returning at some point to investigate these.
Posted by Scooby Gill at 8:53 pm