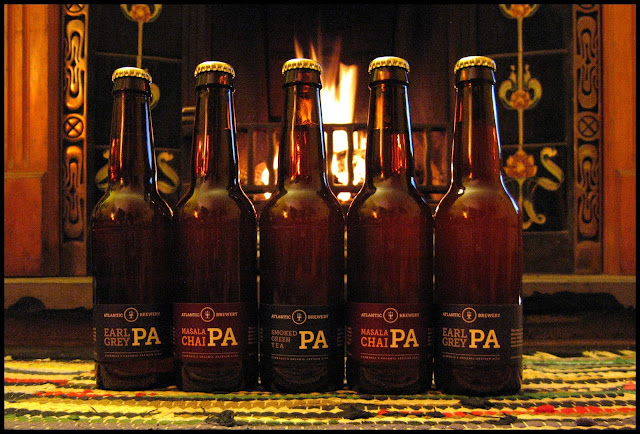 There is nothing like a lovely cup of tea in front of the roaring fire at this time of year.  For me it could be a nice spicy chai, a zesty earl grey or an oh so smokey lapsang (very rarely do I go for a normal cup of 'British Rail' tea these days).  I also enjoy a beer here and there so imagine my delight and curiosity when I discovered that Atlantic Brewery had recently created a range of tea inspired brews which include the aforementioned favourites.  It makes the decision a little easier when it comes to tea or ale in front of the fire!

We first met Stuart from Atlantic Brewery some years ago during the early days of his flourishing business.  We were fortunate enough to visit him at his amazing 18th century farmhouse near Newquay, where the brewery is based, to sample his ales and have a proper tour.  Since then we have watched Atlantic go from strength to strength with his ales populating the shelves of not only farm shops and independent local retailers but also major national supermarkets and even our local shop!  We hadn't seen Stuart for years though so it was lovely to catch up with him at the Cornwall Vegan Festival recently.

I first discovered the tea inspired range from Atlantic after my boss had very kindly brought in a real ale advent calendar for our whole team.  I noticed the list of bottles it contained included the Earl Grey one from Atlantic and hoped that I would pull that one out when it was my turn on the calendar.  Sadly I didn't but the colleague that did was happy to swap. Upon visiting Stuart's stall at the festival and discovering the others in the tea range, I immediately purchased some of those too.

I must admit I am yet to sample any of the bottles as I am saving them for the festive period but I know they will be good.  All the Atlantic ales are lovingly crafted, bottle conditioned, organic and vegan.  Right from the beginning Stuart made a point of proudly displaying the vegan label on all his bottles.  I could be wrong but I believe he is the only Cornish brewery to do this.  As an additional bonus, Cornish spring water is used from a spring on site and as many of the ingredients as possible are grown there too including hops, ginger, chilli, blackcurrants and elderflowers.  So what is not to love about these ales, and that is before you have even tried them?!

The tea inspired ales are yet to be included on the website but do check out all the other delicious brews at Atlantic Brewery.  It might be one of the originals but the Atlantic Blue still remains one of my firm favourites especially as it's darkness perfectly suits an evening in front of the fire with the wind and rain lashing against the window.  Perhaps however I am about to find a new favourite amongst the Earl Grey, Masala Chai or Smokey Green Tea ones currently awaiting the start of the Festive Silly Season?
Posted by Scooby Gill at 8:12 pm