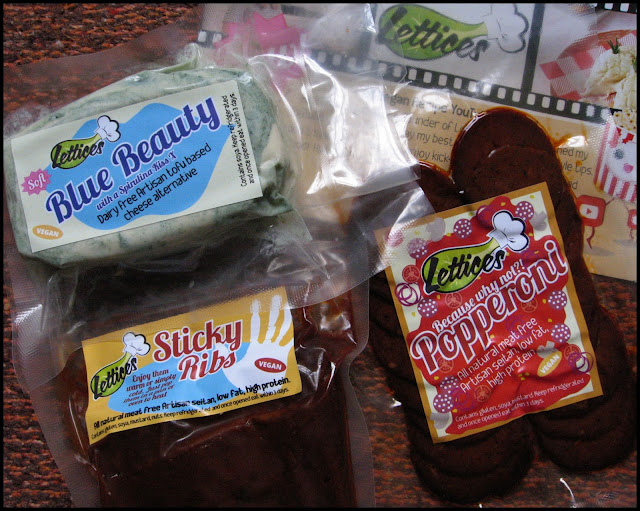 A while back we bumped in to the lovely people from a new artisan vegan company called Lettices. They have been doing the vegan festival rounds to market their small batch meat and cheese alternatives, which they produce from their base on the Isle of Wight. We met them at Animal Aid's South West Christmas Without Cruelty Festival in Exeter in November.

The founder of Lettices, Poppy Lettice, has been a vegetarian all her life and has more recently turned to veganism.  It was this transition, along with travels to countries that embrace plant based diets, that led Poppy to turn her existing culinary interests and talents into experimenting with producing her own range of exciting vegan alternatives.

The Lettices stand and display of products at the festival was colourful and plentiful and, coupled with a 'buy any three products for £12' festival deal, it was hard to resist taking some home with us.  We bought the Blue Beauty, Sticky Ribs, and Popperoni pictured above.

We tried the Popperoni first, in bagels with hummus and roasted red peppers, and it was an instant hit with Phil.  It wasn't quite such a hit with Scooby, being less inclined to like the chilli hit of pepperoni style products.  To be fair Phil had chosen our selection of products and so something with chilli was bound to have crept in there somewhere!

Next up was the Blue Beauty cheese.  One evening Scooby had a sudden urge for cheese and crackers and so grabbed it from the fridge.  Being brought up in a house where the only real experience of cheese was cheddar, and having left home already a vegan, she had never experienced any other 'exotic' cheeses before.  This Blue Beauty was therefore a little bit of a shock.  Phil was less shocked by its intense and unusual flavour.  His dad was a regular stilton eating cheese monkey, so he had grown up eating regular stilton before he was vegan.  This unusual cheese might not have been such a hit with Scooby just on crackers, but melted on top of baked potatoes; well that is a completely different story.  The mild 'creaminess' of the baked potatoes mellowed but enhanced the bold flavour of the cheese. Needless to say, once we had discovered the wonders of this cheese served like this, it disappeared pretty quickly and we were left wanting more!

Last but by no means least, we devoured the Sticky Ribs.  These were our top pick of the three, being generous in flavour, texture, and 'tardis' like quantity that emerged from the packet.  They were a pleasure to get your teeth into, bursting with umami spicy goodness!  Despite the fact that they were tasty enough to want to consume in one hit, we managed to make them last over two meals.  Given their ability to fill you up, if we had eaten them all in one go that would have been just plain greedy.  So all in all, great value too.

Watch out for Lettices over the coming months at a festival near you.  If you can't wait to catch up with them doing the rounds, you can check out their full range and buy online from the Lettices website.  Alternatively, you can catch up with their latest news on their Facebook page, and they even have their own YouTube channel which includes Poppy's best recipes and vegan lifestyle tips.
Posted by Scooby Gill at 1:21 pm