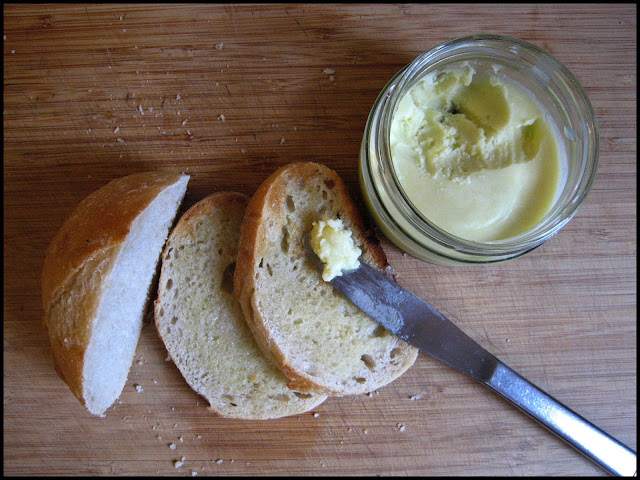 With the madness of the Silly Season over with it is time to return to more everyday considerations and what could be more everyday than a slice of 'buttered' toast.  However, these days for vegans the palm oil contained in most purchased vegan margarines has become a complicated consideration for such a simple delight as a spot of toast and tea. Not so delightful when you consider the source and destruction caused in order to make the chosen shop bought spread.

Returning to the beginning of December, at the Cornwall Vegan Festival, I was 'shooting the vegan breeze' with a lovely fella called Charlie and the very subject of palm oil free alternatives came up.  I was telling him about the Tiana Spreadable Butter that we had been using and he mentioned about a vegan butter recipe that somebody had passed on to him. He promised to pass it on to me and, true to his word, the next day he had pinged it into my Facebook messages. Christmas and family visits then took over and I didn't get a chance to try out the recipe until now.

I really wasn't sure what it would turn out like but let's just say the remains of the sourdough loaf we had were obliterated this morning over toast and tea as a result.  It really is rather good; so good in fact, I'm not entirely sure I need to continue my seemingly impossible search for more palm oil free alternatives in the shops or spend out on lovely but expensive Tiana anymore.  So thank you Charlie for passing on this recipe and thank you to the person who originally passed it on (it only mentioned Vegan Cherry on the recipe details).

In the tradition of vegan buttery love, here is the recipe to pass on again -

Blend well and chill.  I did try and just mash it up well instead of blending it to save on the washing up but resorted to blending in the end to get the best result.

Charlie also suggested adding 1-2 teaspoons of nutritional yeast so I will try this next time. The original recipe also suggests for extra taste you can add 1 clove garlic and 1 teaspoon of onion powder.

Enjoy and be prepared to be 'buttered up'!