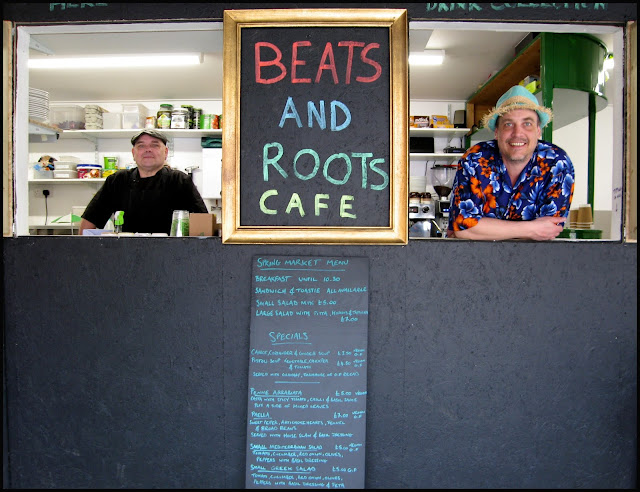 Any older vegans out there who remember how vegan food was intricately mixed up with alternative life and musical vibes will appreciated a new food venture opened this last week in Cornwall.  Beats and Roots opened its doors fully on Wednesday in the heart of Cornwall; Redruth.  There are so many interesting aspects of Beats and Roots to explore; and all involve heart and soul, great musical vibes and lots of lovely food.

For a start, as already mentioned, veggie and vegan food has always been the mainstay of the alternative movement/music scene, but in my era, the 80's and 90's, no hunt sab benefit gig was complete without the obligatory veggie burger offering.  It was served up with punk rock flair and rib sticking finesse.  It was grassroots royalty.  As much as it is wonderful that veganism is becoming a mainstay, I sometime miss that down to earth vibe.  What I don't miss however is slipping around on a greasy floor serving up dry veggie burgers to drunken punks and wannabe rastas (anyone remember Roots on Union Street in Plymouth?) .

In terms of vegan food however, things have thankfully moved on and, although Beats and Roots still maintain an air of desirable grassroots about their venture, their food really does go way beyond the old skool definition of that.  Whilst many establishments try and replicate that need for junk food alternatives, Beats and Roots break that mould and take a fresher approach with their veggie and vegan offerings.  There is no deep fryer involved in the food that Beats and Roots provide.  It's fresh, vibrant, and full of seasonal flavour.

We took the time on Saturday to drop in on Paul and Ben, the heart and soul behind Beats and Roots, and sample some of their foodie wonders.  The menu is all veggie, with a large section of the menu vegan.  We chose from the specials board, which had a Mediterranean flair to it, and enjoyed a generous portion of the paella; an unctuous hearty dish which involved fresh broad beans, artichoke hearts, fennel and sweet pepper.  It was topped off with a good supply of house slaw with a basil dressing which at first I thought was an odd addition only to realise what a crunchy and wonderful contrasting texture and flavour it was to the main event underneath. Genius. We also savoured the pistou soup which was jam packed with vegetables, chickpeas, and flavour.  The obligatory topping of vegan pesto on top spiked it further with zesty appeal, whilst the big hunk of granary bread with vegan spread did wonders in soaking up any juices.  After a round of teas (several different plant milks supplied), we topped off our scoffing session with some toasted coconut chocolate slices.

The food was a delight, and the ambiance, helped along by the  ensuing Spring Market, was also vibrant in an unfussy, down to earth vibe.  Beats and Roots is based in The Buttermarket in Redruth, just off the main high street.  It is in a cosy suntrap of a courtyard where people congregate to enjoy a chat, a look at any additional stalls or activities spilling out from the main market, and now Beats and Roots with its range of hot and cold beverages and veggie food ranging from breakfasts, lunch and snacks. Should the weather not afford the suntrap affect, fear not as there is a large undercover area to watch any uncosy propur Cornish rain from, and you would never be cold with the warming food offerings available.  Another wonderful advantage to the location of Beats and Roots is that your doggy companions are more than welcome in this open environment and the two dogs there when we were seemed particularly content with that arrangement. 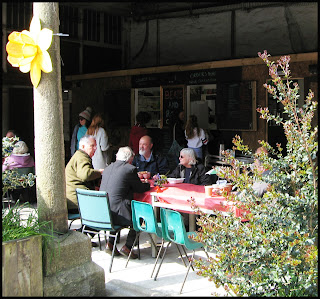 Beats and Roots regular hours are Wednesday to Saturday 8am - 4pm.   The early opening is to offer the chance for any early birds to grab the opportunity of a wholesome breakfast (I'm told their various forms of vegan porridge rock) on the way to work, particularly via the nearby train station.

However, aside from the regular hours, there are some interesting plans from Beats and Roots.  Music is as equally important to the lives of Paul and Ben, hence the name of this new cafe. Just to demonstrate this fact, the accompanying tunes emanating from Beats and Roots kitchen were as groovy as the food;  (was that Ebo Taylor I heard on Saturday? - love it!).  As the name suggests there are some plans to further infuse the two best things in life; music and food.  If you too live for such things, it may be that Beats and Roots may become the go to destination for your evening entertainment.  They have already done a few evening events (we are gutted we missed the Indian Street Food event) but many more are planned with live musical entertainment involved.

Redruth is much maligned by some, and totally missed by many visiting Cornwall.  It could therefore be seen as a strange destination for such a venture involving veggie/vegan food and an alternative music scene. However, if you want the real Cornwall, away from the entrapment of gentrified tourist destinations, then you need to look to places like Redruth.  It is the heart and soul (and by the way it has a great 'stacked to the rafters with amazing bargains' K9 Crusaders Charity Shop and who cannot love the dog sculptures made of welly boots in the High Street) of Cornwall.  The 'Roots' part of Beats and Roots could find no better home that Redruth for this very reason.

We totally recommend Beats and Roots for a down to earth, fresh, vibrant and totally groovy vegan vibe.  Somehow it manages to blend old time roots nostalgia with an up to date freshness that is thoroughly enjoyable.  Go check them out during their regular opening hours and further watch out for any awesome evening events they have planned in the future by following them on Facebook.
Posted by Scooby Gill at 8:51 pm