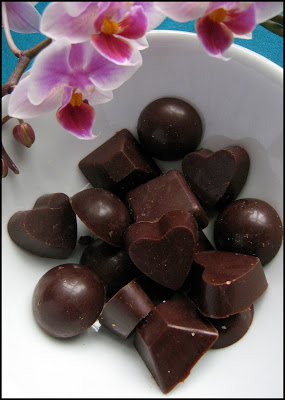 Well the snow finally reached us here in Cornwall and threw the whole county into its usual panic. Even I, once a Dartmoor dwelling snow driving demon, get a bit freaked out now by the white stuff.  Too many times caught out on the main roads of Cornwall before even reaching the small lanes to home, have made me soft.  Luckily for me, my workplace made the sensible decision this time to close.  I was able to make it home through the chaos that preceded the main chaos and watch it all unfold from beside the fire and in a warm kitchen.

I haven't had a whole load of time recently for culinary experimentation (hence the lack of blog posts with recipes).  There have been some work things to consider and deal with from home during these past few snowbound days but on the whole it did open up some unexpected time to hole up in the kitchen.

Whilst others cleared the supermarket shelves in panic of a couple of snowy days, I opened our pantry door and basked in the glory of knowing that our stocks would probably last us through the whole winter.  It is in moments like these that our love of food shopping and well stocked cupboards come into their own.  Pretty much everything that others are rushing out to buy, we could make with our supplies.  That includes chocolate.  The idea of being trapped in the house didn't bother me but the idea of being trapped in the house with Phil when our chocolate supplies ran out did.  To him, chocolate is essential and I couldn't chance a chocolate withdrawal situation.  With that in mind, the first thing I made was chocolate.  Our recent discovery and making of pistachio ice cream led me to the idea of making pistachio chocolates.  What could possibly go wrong with that combo?  Nothing it seems, apart from if I hadn't managed to take a photo before Phil woofed them.

Makes about 18 to 20 chocolates depending on what molds you use.  You could also make into a flat slab of chocolate too.  Be creative!  If I'd had any pistachio nuts I might have added some to the mix for chunky nuttiness.

Melt 60g of cacao butter in a bowl over a saucepan of warm water.  Once melted add 3 tablespoons of cacao powder, 2 tablespoons of pistachio butter, 1 tablespoon of lucuma powder, 30g liquid sweetener (I used yacon syrup because I had some left but would have used maple syrup if not) and some vanilla essence or powder (I used a sprinkling of vanilla powder).  Mix well ensuring all the pistachio loveliness is well incorporated.  Pour into your molds and put in the freezer (if you are impatient) or the fridge to set.  Unmold then store in the fridge.  Hide from Phil if you want some for yourself.  Enjoy! 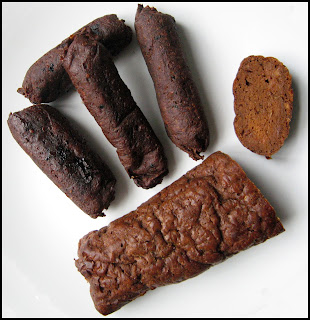 Next up, I wanted to make some vegan meaty staples to last a few days so it was on to the seitan.  I'm always experimenting with seitan. One day I will kidnap Dawn and Paul from the Cornish Vegan and make them tell me their secret chick'n seitan recipe, but in the meantime I continue to try lots of different recipes (from cook books and from overnight rambling thoughts).  This time I had the idea of using a mixture of sun dried tomatoes and mushrooms for an Italian sausage theme.  I mixed up the vital wheat gluten flour with some self raising flour this time too (I often mix it with varying flours).  Baking (the big sausage in the photo) and also steaming then baking (the smaller sausages) were also used as different methods.  Some of the results may have looked (ahem) a little like dog turds but they were tasty and it is definitely a flavour combo I will use again.

We have used the sausages so far in an Italian style bean stew and still have loads left over for other creative culinary uses.

Put the tomatoes and mushrooms in a bowl and add boiling water to cover.  Throw in all the rest of the ingredients except the two flours, mix and then let it soak for at least 20 minutes.

Tip the whole soaking mixture, water as well, into a blender.  I used a Nutribullet.  Whizz it all up.  I then made the mixture up to 1 pint with water just to give some precision with measurements (and I couldn't have fitted any more liquid in the Nutribullet before whizzing anyway!).

Put the two flours into a large bowl and then add in the wet mixture.  Stir it all up and then get your hands in and give it a bit of a kneading.  The mixture was wetter than I had been used to before but I went with that (part of the experimenting!).

I steamed the small sausages for about 30 minutes before then unwrapping and baking for a further 30 minutes in the oven at 200 degrees C.  The larger sausage I left wrapped and baked for about an hour at the same temperature.  The larger one was slightly doughy still so I cut off slices and baked a little while longer to crisp up a little more.

Both versions of cooking worked well.  Next time I might try the same recipe but simmer unwrapped first before then cooking further in whatever recipe we are then making it for.

As I finish this post, the snow has now been consumed by rain; the more usual Cornish winter weather!  The chocolate has all been consumed too; the more usual Driftwood Vegans household situation.  We do however still have seitan supplies for another meal.
Posted by Scooby Gill at 12:30 pm