When it comes to our food we like to keep things as simple as possible.  We prefer to cook from scratch as often as we can.  If we do buy ready made items, the less ingredients the better and we certainly scoff at any ingredients not easily identifiable as natural (and obviously non animal).  This is one of the reasons we have tended to steer away from shop bought tortillas or wraps.  Even most of the supposedly more natural ones have a complicated and long list of ingredients.  For something so simple it is a wonder they manage to fit that many ingredients in them.

For this reason and for a while now we have been talking about buying a press so that we can easily make our own tortillas and wraps.  Recently we finally got around to it and have to say there is no going back.  You could argue that a rolling pin would do the job just as well but no, this really is the 'kiddy' when it comes to quickly and easily producing a stream of freshly made tortillas.  At the end of a frustrating day at work it is also very therapeutic to press the hell out of something! 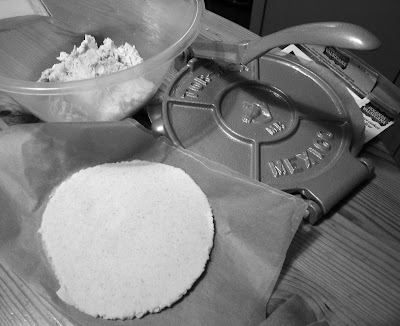 For tortillas the key ingredient is masa harina, which is made from corn kernels that are soaked in lime before being ground into a flour.  The wonder of home made tortillas with masa harina is that the only other ingredient you need is water.  Mixed into a dough, it is then pressed into your desired thickness and then dry fried (or cooked in various other ways for differing Mexican dishes).  It really is that simple, and definitely much tastier than the shop brought varieties.

There are plenty of suppliers of tortilla presses.  Preferring to avoid the aluminium and plastic ones, we recommend the cast iron varieties, but the top of the range ones are big bucks.  However, we managed to find an iron one for around £30.  Masa harina is available for around £4 for 1kg or less from various suppliers online.

So if, like us, you prefer making simple, tasty, honest food it could be time for you to invest in a tortilla press and some masa harina.  If you do I'm sure it will soon become a pressing issue with you too!
Posted by Scooby Gill at 7:03 pm