Ribena Smiles of the 70s 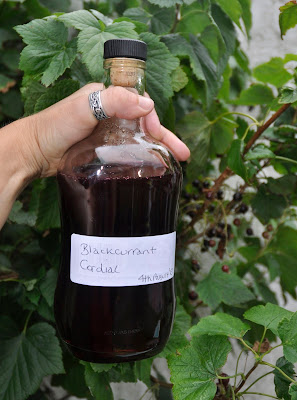 At the weekend, between showers of rain, I spent about 30 minutes picking the well ripened blackcurrants from our large bush in the back garden.  It was a well overdue harvesting session as the sheer number of currants on the bush had led to a certain level of procrastination in 'getting around to doing it'.

Blackcurrants are one of those fruits that are a little less easy to use than the sun kissed sweetness of berries such as strawberries.  Apart from jam and the odd uses in various cheesecakes and on top of chai oats in the winter (from the few that I freeze), I had struggled to be creative with them as their powerful fruity punch is an acquired taste.  Phil is even less of a fan than I am.

This year however, I was determined to make the most of these nutrient packed treats in a different way.  I decided to make cordial for the first time with memories of the red stained smiles of my 70s youth, born of Ribena glugged greedily from faded Tupperware beakers.
It was a good move and the resulting cordial, although now consumed from slightly more sophisticated vessels than Tupperware, is being glugged in much the same unsophisticated fashion as the six year old me. There's no shame in that; although I refuse to show you a photo of the resulting red stained smile.

Stew your blackcurrants in enough water to cover until soft and mushy. It helps to crush the currants as they cook from time to time too.
Strain the juice well, pushing as much juice out of the pulp as possible.
Feed the resulting pulp to your neighbourhood birds or badgers.  It won't go to waste.
Measure out the juice and weigh out a similar amount of sugar or a bit less if, like me, you want to reduce your sugar intake.
Heat the juice and the sugar together until it is completely dissolved and syrupy but not so long that you make it really thick.
Bottle in a sterilised bottle and pop in the fridge and dilute to taste. It should keep easily for two to three weeks but you probably would have consumed it well before then!