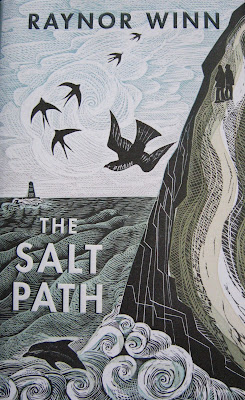 As the strap line to our blog suggests, we don't just write about vegan food, although yes we admit it does seem to dominate!  Given the fact that Phil and I read so many books, it is surprising that books don't feature more.  My mum used to tease us about how many books we have and always ask "so how many books did you buy today?", if she knew we'd been out for the day.

The majority of our reads come from charity shops, but every now and then you come across books that you just have to splash the full cash on (and indeed support book shops and talented writers at the same time).  The Salt Path was one such book and one that will remain on our bookshelf indefinitely instead of circulating back to the charity shops.  It warranted a blogpost too.

If there was ever a book to put perspective back in your life, this is it.  I've had a couple of shitty years and The Salt Path almost became a self help book for me.  Crucially this is a real life story where life has been thrown into a storm force wind.  Facing into that storm was the author Raynor Winn and her husband of 32 years, Moth.

Learning that Moth is terminally ill is unbelievably just the beginning of their journey along The Salt Path.  Days later they lost their home and livelihood; basically everything their lives were.  At this point most people wouldn't then take off on the 630 mile walk along the South West Coast Path.  Raynor and Moth did; redefining their life together with every step they take.  It is a gripping read and one that has you walking alongside them all the way.

Despite the fact that their situation is so desperate and one that most of us, thankfully, have not endured, I found their story really relatable.  Having lived in both Devon and now Cornwall, Phil and I are familiar with the coast path.  We have walked the entire section in Cornwall and most of it in South Devon over the years, not with the shadow of terminal illness or being homeless though.  Relating to it however is less about the familiarity of the scenery that Raynor and Moth walked through and lived within.

The natural world has a rawness and honesty to it that somehow comes to the rescue when all other things in the world have abandoned you.  It's like it holds you on the edge when all those other things behind you are trying to push you over.  When my mum was in her last few days, the hospice staff were kind enough to move her to a room with a better view of the outside.  Here she was transfixed with watching the wind gently moving the nearby trees and both of us watched together.  We took solace from that, as I do now from watching clouds drift overhead, hearing waves roll in, sensing the glide of the seagull, smelling the scent of seaweed on the air.  It's almost as if when life strips you back to the basics, you rediscover what life and home really mean.  It is not an unknown thing that the natural world can heal, but it is often a forgotten one.

There is another aspect to The Salt Path that I found relatable.  Most of us as kids I'm sure had times when we dreamt of running away; that teenage urge to strip away all that is imposed on you and go find yourself.  I've even felt that as an adult, and each time I have dreamt of it, it is always the wilds that have lured me.  It is a romantic concept, and far from the reality that Raynor and Moth were forced, rather than lured, into.  Homelessness is not a teenage dream.  It is a hungry, cold, desperate nightmare.  However, what remains from that concept in Raynor and Moth's journey is that stubborn determination, fierce independence and openness to just see what was around the next corner, despite the lack of choice.  It holds a strange kind of freedom.

The Salt Path is Raynor's first book, and an example of what indeed was around the next corner for her.  She now lives in Cornwall with Moth and their dog Monty, and has become a regular long distance walker.  She also writes about and campaigns against homelessness.  It would be a delight to run into these inspiring people along the salty pilgrimage of the South West Coast Path.

If you are feeling like you want to run or hide away at the moment, or life is just getting to that 'really, what else could possibly be piled on top of me' moment, I would implore you to do two things.  Go and get yourself a copy of The Salt Path and sit in your warm, cosy home and read it.  The second is to then go out into nature and let it seep into you, physically and mentally.  Perspective and choice is a privilege that not everyone has access to.

To catch up with the latest from Raynor check out @raynor_winn
Posted by Scooby Gill at 5:15 pm